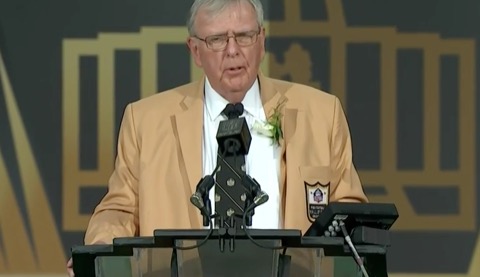 Let me start this off by saying Ron Wolf deserves any and all honors anyone wants to give him. His importance to the Green Bay Packers is only surpassed by Lambeau and Lombardi.

Now that that’s out of the way, we really don’t get this.

The Packers are honoring Wolf, the team’s general manager from 1991-2001, during halftime of Sunday’s game with the Detroit Lions.

That part makes sense, since Wolf was inducted into the Pro Football Hall of Fame back in August.

What doesn’t make sense is multiple news outlets are reporting that the Packers will be honoring Wolf by unveiling his name on the inner facade of Lambeau Field on Sunday. All of the Green Bay Packers’ Pro Football Hall of Famers receive this honor.

The exception to the rule was Ron Wolf.

He’s the exception to the rule because his name was added to the Lambeau Field facade in 2006, back when no one thought Wolf would join the Hall. The Hall of Fame didn’t introduce their “contributors” category until this year. Prior to Wolf and former Bills and Colts GM Bill Polian entering the Hall in 2015, only one personnel man — Jim Finks, who ran the Vikings, Bears and Saints — had been enshrined.

So in 2006, Wolf was the only non-Hall of Famer with his name on the inner face of Lambeau.

Are they Packers adding it for a second time on Sunday?

They may unveil it again and pretend like their fans are idiots and don’t know any better. Wouldn’t be the first time that’s happened.

Hopefully, these clowns come up with something better, though.