Packers Have Two Options to Fix Their Offense 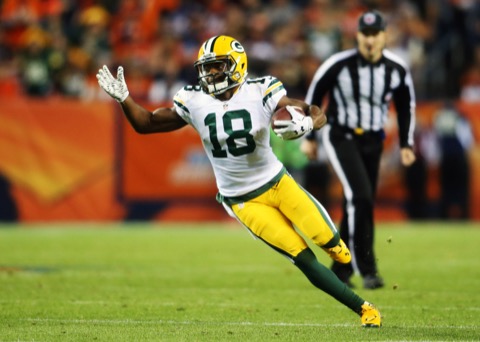 The Green Bay Packers offense is horrible. They haven’t been good in weeks on that side of the ball, but they hit depths we’ve never seen them hit on Sunday, putting up just 140 yards of total offense at Denver.

The primary issue is the Packers’ receivers cannot get open. Randall Cobb is being double-teamed and no one else can consistently beat one-on-one coverage. Tight end Richard Rodgers occasionally does, but can’t do anything after he catches the ball (as his 8.9 yards per catch average tells us) and is a liability as a blocker.

Plus, quarterback Aaron Rodgers will not throw into tight coverage. Thus, he leaves a lot of throws on the field. While this is a great strategy for limiting turnovers, it doesn’t work when your receivers just aren’t creating separation.

You simply have to take some chances and make some throws.

But let’s step away from Rodgers’ mindset for a moment. It probably isn’t going to change.

That leaves the Packers with two options to fix their offense.

Now, you know Ted Thompson wouldn’t dream of acquiring a player he didn’t draft or sign as an undrafted free agent, himself. So clearly we need to focus on the second option.

One option we mentioned is to make a commitment to the running game. The Packers have two capable backs in Eddie Lacy and James Starks, and a solid running game always opens up the passing game.

It’s not that simple, though. The Packers’ pass vs. run volume is typically fairly even.

The only game so far this season in which they’ve passed significantly more was against St. Louis, when they threw 32 times and ran just 17. In every other game the difference between the number of times they threw and ran has been four, five, two, four, six and seven. That last number is actually in favor of rushes.

Plus, the Packers are still going to need to throw the ball.

I’m talking about pick plays, bunch and stack formations and non-traditional alignments, such as when the Packers put Randall Cobb in the backfield.

Obviously, offensive coordinator Tom Clements does employ that last option from time to time, just not nearly enough. Plus, he’s barely used any of the other options.

Instead, the Packers are still using the formations and plays they used when they had Jordy Nelson — two receivers lined up out wide and one in the slot. This spreads the field and allows Rodgers to easily go through his progressions and spot the open receiver.

The problem is, no Jordy Nelson and no one else getting open.

What we’re suggesting is a change in philosophy.

Instead of relying on Rodgers to extend plays and find the open man, these pick plays and bunch formations rely on quick throws and the receiver to make a play after he has the ball in his hands.

It solves a number of problems.

First, the receivers would actually be open. The formations dictate that defensive backs have to play off the line of scrimmage, so they don’t run into each other when the receivers’ routes cross. The other option — Cobb in the backfield — forces the defense to either commit a cornerback to covering a running back or using a linebacker to cover Randall Cobb.

Neither is desirable for a defense.

Second, Rodgers wouldn’t have to extend plays when his protection breaks down. We wouldn’t be worried about David Bakhtiari getting shoved straight backwards or Richard Rodgers totally whiffing on a block. Aaron Rodgers takes less punishment.

The downside is, not as many big plays.

But, the Packers aren’t making big plays in the passing game anyway. They have no deep threat and they have no outside threat. The play calling simply doesn’t work with their current personnel.

It needs to be changed up.

“We basically had to cover twice. That was the plan. First you cover your guy for two-and-a-half seconds. Then you don’t stop. You figure Rodgers is getting out on the edge, scrambling around looking for a receiver after he leaves the pocket. And we were able to hang in there.”

There’s the recipe for beating the Packers offense right now.

Just stay on your man because he isn’t going to get open anyway.

It’s time to change it up. What’s surprising is the Packers haven’t realized that yet.

Their receivers have been failing to get open for weeks now.

Just look at the Patriots. Lackluster receiving corps, but Tom Brady is out there tearing it up every week.

How do you think he does that? It isn’t because he has great receivers. It’s scheme and play calling.

It’s time for the Packers to take a page from that book.

Clay Matthews Demonstrates Toughness, But It Hinders Him