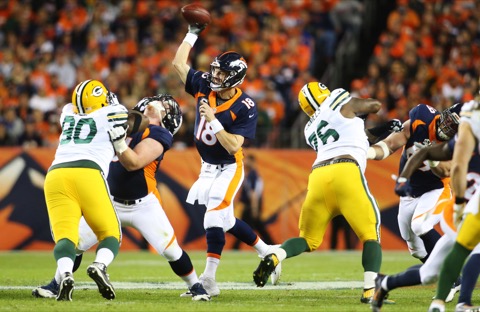 And you thought this was a Super Bowl-caliber team.

Well, Peyton Manning and his geriatric arm put that notion to rest quickly on Sunday night. Manning, who came into this game with more picks (10) than touchdowns (7) and a pathetic 72.5 QB rating, looked like the Hall of Famer he is.

He obviously watched what Phyllis Rivers did to the Packers before the bye and threw early and often. Manning did most of his damage over the middle, but it was the same scenario as the Packers saw against San Diego.

And of course, the Packers defense had no answer. They had two weeks to marinate on that possibility, but apparently didn’t even consider it. Like, WHY WOULD ANY TEAM THROW THE BALL QUICKLY AGAINST US!?

The Packers’ answer or, more accurately, defensive coordinator Dom Capers’ answer, was to drop back into zone.

LET’S NOT PRESSURE THE QUARTERBACK!

Look, let’s not confuse this. If you think we’re blaming this all on Dom Capers, we’re not.

The Green Bay Packers got embarrassed by the score of 29-10 at the hands of the Denver Broncos. There’s plenty of blame to go around.

Wade Phillips, the Broncos’ defensive coordinator, is senile and he’s gotta be 90. Somehow, that guy can call a defense — and be innovative with a defense — more so than the “great” Dom Capers.

Hey, he’s 67 and a defensive genius, though! Remember that!

Mike McCarthy’s teams are now 8-2 coming out the bye because Mike McCarthy didn’t do jack shit this week. We thought he’d at least throw some new offensive wrinkles in because, well, what the fuck else did he have to do during the bye?

Just sat around with his thumb up his fat ass.

Not gonna do any work on that offense of which my genius has so curated. Just gonna lick pumpkins with my 4-year-old daughter.

And you know what happened?

“Oh, I just can’t throw the football down the field!”

The Packers defense was dogshit and that means the team needs their star player to step up.

What did he do?

Got scared. Ran home and shit his pants.

In other words, Aaron Rodgers was in playoff form.

On this night, when the Packers NEEDED Aaron Rodgers, some guy wearing No. 12 went 14-of-22 for 77 yards and no touchdowns.

The same 77 fucking yards you or I could have thrown for without some whore named Olivia sucking our cock.

Here’s a guy who plays great when everyone else is playing great. And then when the team really needs him to be his NFL MVP self… shits the bed.

And listen, that’s only because Aaron Rodgers isn’t clutch.

Hell, that asshat was more likely to fire a pick than a touchdown if, you know, you actually needed a touchdown to win.

This isn’t out the ordinary for the Green Bay Packers.

Aaron Rodgers and this Packers team are just another ordinary team, by our standards.

But especially Aaron Rodgers. We remember when he was compared to Michael Jordan.

Michael Jordan made his teammates better. Rodgers is just there. Frankly, he ain’t shit without Jordy Nelson.

So maybe Jordy is Michael Jordan. Rodgers sure as hell ain’t.

If he was, the score may have been at least close in this game vs. Geriatric Peyton Manning.

Just another year of shtbags on defense and MVP only-when-it-doesn’t-matter play at quarterback.