Packers Continue to Embarrass Themselves, Lose to Panthers

by Monty McMahon
in Uncategorized
119 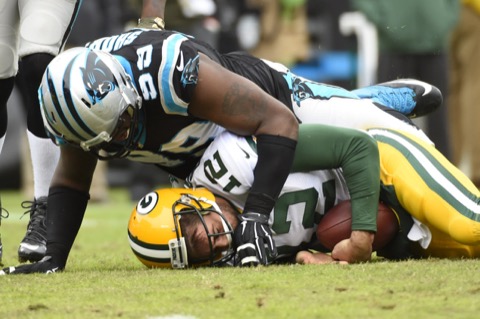 Boy, those Green Bay Packers sure made it interesting, didn’t they?

And we would have been happy with that if this were the 1980s and we were playing the Chicago Bears, but this is 2015 and this shit is unacceptable.

The Packers, who got their ever-loving asses handed to them by the Denver Broncos last week, came out in a game in which they should have had fire in their eyes, hell in their veins and pain on their minds and once again, shit the fucking bed.

No doubt the Packers made it interesting at the end, but you can’t play football for a quarter and win a game at this level.

Unfortunately, before that it was a whole lot of ho hum.

Ho hum, we’re the Green Bay Packers, our offense is just going to put up points on these assholes.

Ho hum, we’re the Green Bay Packers, our defense is going to create turnovers and pressure the quarterback into oblivion.

From the top down.

Despite some late-game heroics, the Packers lost to an obviously superior, but obviously less-talented Carolina Panthers team 37-29.

The heroics came courtesy of Aaron Rodgers, who finished with 369 yards, four touchdowns and a pick. That just made this massacre appear to be close.

Well, that and the fact that Panthers’ quarterback Cam Newtown is about as accurate as buckshot.

If that piece of shit could throw anywhere near a receiver half the time, this would have been a 35-point win in favor of the Panthers.

Instead, ‘old Buckshot gave Rodgers a chance and Rodgers failed.

But let’s not focus on that.

Sure, Rodgers was handed an opportunity by rookie corner Damarious Randall to tie the game. Randall picked ‘ole Buckshot with a little over three minutes remaining. The Packers were down eight and Rodgers led the Pack down the field.

Then he shit the bed by throwing a pick on fourth down.

And look, we’re not trying to blame Rodgers for this loss, although, it would be nice if you came out and played all four quarters for a change, Rodgersface!

Instead, Rodgers dillied and dallied until the Packers were down huge.

And why were they down huge?

Well, only because their defense is a flaming pile of shit!

I mean, seriously, if someone set the Green Bay Packers defense on fire, placed it on my doorstep and rang the bell, I’d merely open the door, look down and kick that piece of shit to the curb and let it burn.

Fuck those fucking bags of shit.

Here’s a unit that gave up over 500 yards to both the San Diego Chargers and Denver Broncos. Couldn’t be that bad against Carolina, could it?

They only gave up 427 yards. Like, they would have given up 500 easy if Buckshot could throw with any accuracy, but they were lucky in that aspect.

Lucky that their opponent fucking sucks and yet they still gave up 427.

This is defense is a fucking atrocity, ladies and gentlemen!

And speaking of atrocity, if any one of you wanted to drag the entire Packers offensive line behind the a barn, tie them up like Old Yeller and put them out of their misery, we would fully support your decision.

That unit is the piece of shit inside the flaming bag of shit.

And then, late in the game, you saw safety Ha Ha Clinton-Dix getting shoved on the sidelines by defensive tackle B.J. Raji after Clinton-Dix got in Julius Peppers’ face.

That’s shit that the Minnesota Vikings do.

And not only that, Clinton-Dix — you’re awful!

We can’t imagine someone playing safety worse than you played safety on Sunday. You do not get to be in anyone’s face!

Not only is this Green Bay Packers team a fraud, they’re an embarrassment.

They went out in a game in which we thought they should have some emotion, some fire — after they were completely dominated by a superior opponent — and they showed nothing.

Minus Randall Cobb and minus the fourth quarter.

They should be ashamed.