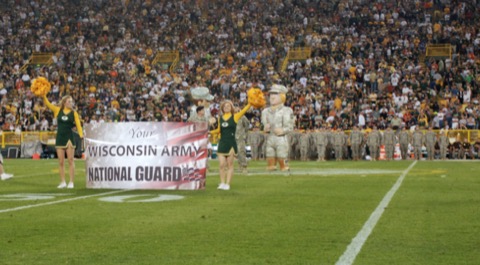 There are those in the Green Bay Packers organization who will do anything for a buck. That includes commercializing the bicycle-riding tradition at training camp and pretending to honor military personnel while accepting tax dollars to do so.

Well, the Packers or any NFL team no longer has the option to accept that money.

Following the release of a report from Senators John McCain and Jeff Flake on department of defense spending amongst professional sports teams, NFL commissioner Rodger Goodell said NFL teams will no longer accept DOD money. He also said the league would repay the money that its teams received as a result of those deals.

So how do the Packers fit into this?

These were the numbers released today.

McCain and Flake started conducting their investigation last spring and, when they released the report today, they admitted that some of the DOD spend is unaccounted for. The numbers above probably aren’t totally accurate.

When this issue came to light this past summer, the Packers’ tab was reported to be $600,000. That put them fourth on the list beneficiaries.

We thought it was bullshit then and we think it’s bullshit now. And before you go off on some holier-than-thou tangent, this isn’t about making money from sponsorships. It’s about pretending you’re honoring servicemen and women because it’s the right thing to do, when you, in fact, are only doing it because you’re being paid to do it.

In other words, duping your fans.

Frankly, the Packers and any other team that took money for these types of promotions should be ashamed. They should apologize, but did they?

You already know the answer. The Packers organization will not be held accountable for anything.

Their reaction when they were called out was to, 1. not renew their contract with the National Guard and, 2. issue some ham-fisted statement from PR hack Aaron Popkey about, “Hey, we do all of this other stuff for the military,” which totally missed the point.

That would be satisfactory.