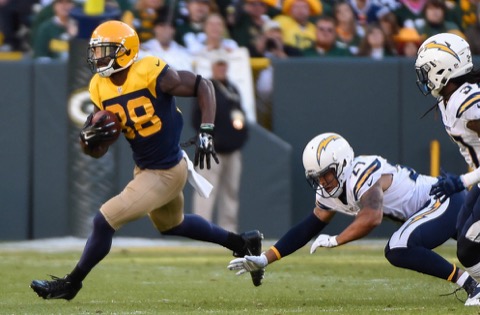 Ty Montgomery will never return to the field. At least that’s what it feels like.

Just like Davante Adams before him, Montgomery is taking forever to recover from a sprained ankle.

Despite practicing this week, that injury will prevent the rookie from playing in his third straight game. The Green Bay Packers downgraded Montgomery from questionable to doubtful on their injury report, Saturday.

A couple other guys were upgraded to probable, however.

They were cornerback Sam Shields and linebacker Mike Neal.

Neal has a hip injury, but said on Friday he planned on playing this week. Shields has a shoulder injury that cost him the Carolina game and most of the Denver game.

The only player who remains questionable is running back Eddie Lacy, with the groin injury that limited him in Carolina.

Clay Matthews in a Couple Promos for The Night Before