Mike McCarthy will Not Be Taking Back Play Calling Duties 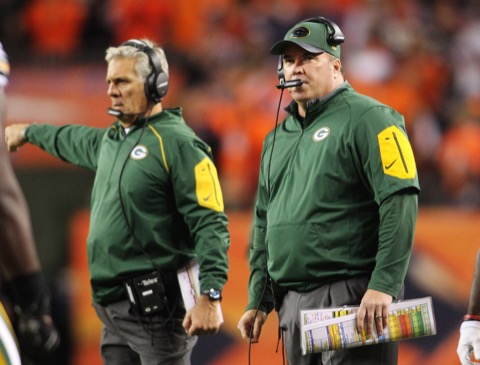 We know you’ve been wondering. We’ve heard this very question being asked.

So, in light of how badly the Green Bay Packers are playing on offense, how long before Mike McCarthy takes back play calling duties?

The answer, it appears, will not be during this present campaign.

“That’s not a good structure,” McCarthy said on Wednesday. “You don’t just abandon the procedure when something bad happens. There was a lot to learn from the last game. we had a chance to look at the tape collectively and had a chance to apply to it.”

That’s the answer we expected and that’s just fine.

There was much made of McCarthy’s decision to hand play calling off to Tom Clements this offseason. This season is first time anyone besides McCarthy has called the plays since McCarthy has been the Packers’ head coach.

There were bound to be some bumps in the road.

Of course, McCarthy’s assertion that the Packers’ last game was the only bump is way off.

In two of the Packers’ three games (San Francisco and St. Louis) prior to the debacle in Denver, the offense put up only 17 points. And that’s fine if you’re the ’85 Bears, but this team clearly doesn’t play that kind of defense.

So the Packers are left looking for an offensive spark.

It won’t be coming from McCarthy, though.