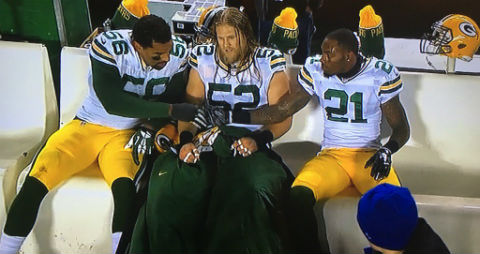 Winning has a way of healing — or at least covering up — any sort of wound, fracture, fissure or what have you. So while they were publicly at each other’s throats two weeks ago in Carolina, Green Bay Packers linebacker Julius Peppers and safety Ha Ha Clinton-Dix are all good now.

The image above was taken from Sunday’s win over the Minnesota Vikings, the Packers’ first in four weeks.

Julie and Ha Ha are shaking it out over the top of a dazed Clay Matthews.

That’s quite the difference from Carolina. Clinton-Dix was in the midst of probably his worst game as a professional when he confronted Peppers on the sideline about something. There were words exchanged and then fat man B.J. Raji stepped in and shoved Clinton-Dix.

That was the end of it, with Clinton-Dix immediately apologized after the game. That was followed by coach Mike McCarthy calling it a non-issue.

Was it an issue?

Guys don’t need to be friends to play ball together. They do need to be on the same page if they’re going to have any success.

These two guys clearly were not on the same page at one point. It’s good to see they appear to be now.

That Stupid Ditka Curse is Over

That Stupid Ditka Curse is Over