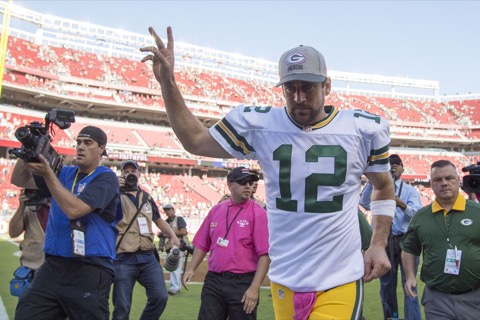 Stats are swell, especially this one right here, right now.

But you can find a stat for just about any situation to construct whatever narrative you want. On the surface, that looks great. The Green Bay Packers are going to win this weekend. Yay!

Maybe I’m skeptical of everything, but I wanted to know which teams the Packers beat following their loss during this streak.

My guess was, this current two-game stretch would be unlike any other because the Packers’ opponents are a combined 13-0 and both games are on the road.

Well, here’s what we learned.

This streak doesn’t include playoff games. When the Packers lost to the 49ers in the wild card round following they 2013 season, they followed that up with a season-opening loss at Seattle in 2014.

It also doesn’t count season-ending losses. The Packers lost at the Vikings to end the 2012 season and then opened the 2013 season with a loss to San Francisco.

They did beat the Vikings in the wild card round the following week, but then they lost at San Francisco in the divisional round and again to start the 2013 season.

What you can say is Aaron Rodgers hasn’t lost consecutive games in the same season, not including playoffs, in four years.

It should also be noted this streak isn’t a Packers’ streak. When Rodgers was out with a broken collarbone in 2013, the Packers lost three consecutive games before salvaging a tie with Minnesota and then losing another contest.

So already, we’re not terribly impressed.

Here are the teams Rodgers has beaten during this “streak.”

What do you see there?

Well, we’ll start by saying it’s too bad the Bears aren’t on the schedule this week.

You’ll also notice all but two of the losses were on the road. Similarly, only four of the follow-up wins were away from Lambeau Field.

Of the wins, the only one that is terribly impressive was when the Packers went down to Houston in 2012 and whooped up on the then-undefeated Texans. With the exception of the 2010 New York Giants, the rest of those teams are mediocre or awful.

So don’t get too fired up about Rodgers’ latest “streak.”

Previous Article
No More Paid Patriotism for Packers, NFL
Next Article
Big Mike is Tired of Hearing About That Denver Game