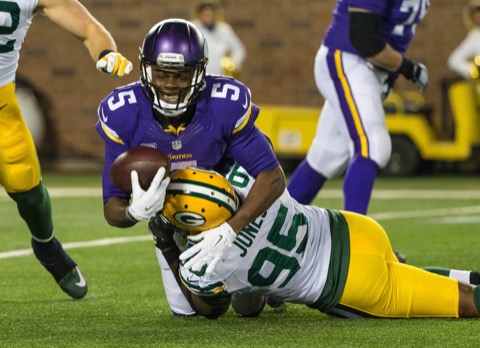 Amazing what a win over the scumbag Minnesota Vikings will do for your mood and outlook. Am I right?

The Green Bay Packers got that and got back on the winning track after a brutal three-game stretch that featured one debacle after another.

Sunday’s win also put the Packers back in the driver’s seat in the NFC North, after ceding the Vikings a one-game lead with their loss against Detroit. Although the teams are equal in the standings, the Packers have the head-to-head win.

They’ll see these Vikings at Lambeau Field again in week 17.

So let’s get on with this.

Datone Jones provides the spark
We’ve been largely down on Datone Jones since the Packers drafted him in the first round. He just hasn’t made that many plays. Except for this year, but then, for some reason, the Packers barely played him. In very limited action prior to Sunday’s game, Jones was showing the ability to generate consistent pressure on the quarterback. The Packers moved Jones to outside linebacker last week. They actually gave him some substantial playing time this week. Look what happened. Jones registered two sacks, knocked down a pass and had four QB hits. That’s being disruptive. It looks like that’s the spark the Packers’ pass rush needed. After not registering a sack for three straight weeks, they had six on Sunday.

Too much pressure, huh?
During the middle of last week, Randall Cobb talked about what was ailing the Packers offense. He said guys were putting too much pressured on themselves. We can only assume he was referring largely to himself. In what was a fairly decent day for the passing offense, Cobb went out and laid a turd. He had two catches for 24 yards, one of which was a touchdown, but he was targeted nine times. A number of those seven non-catches were drops. That’s not the type of day you need from your No. 1 receiver when your offense isn’t firing on all cylinders.

Oh, those tackles…
Another terrible game by the Green Bay Packers tackles, David Bakhtiari and Bryan Bulaga. It seemed like every time the pocket collapsed on Aaron Rodgers it collapsed in exactly the same way. The two defensive ends ended up right in Rodgers’ face. That’s because Bakhtiari and Bulaga consistently got pushed backwards. Manhandled. This is nothing new with Bakhtiari. He’s been below average all season. Opposing teams know he cannot stop a bull rush to save his life. As for Bulaga, we’ve never been high on him and you’re really starting to see why. He isn’t athletic or quick and now he’s also getting shoved around. The Packers’ No. 1 offseason priority has to be to find a left tackle. We know they won’t do anything about right tackle, since they just gave Bulaga a ton of money before the season. Bakhtiari is still on his rookie deal, so there’s no such commitment there.

The refusal to play Jeff Janis has reached idiotic levels
We really don’t get the Packers’ refusal to play Jeff Janis. When the guy gets on the field, he just makes plays. He had a 70-yard kickoff return on Sunday and he would have caught a huge pass if Rodgers wouldn’t have overthrown him on a deep ball. Not ready? Doesn’t do this or that right? Doesn’t have the experience? The Packers and the local beat writers can take that narrative and stuff it. Find a way to get this guy involved. He’s the only legitimate deep threat you have. Use him.

Okay, Mason…
We’re not really into patting kickers on the back, but we’d be remiss if we didn’t say something about Mason Crosby’s day. Five-for-five on field goals with a long of 52. More impressive, it was cold out there. The guy accounted for more than half of the Packers’ points. So, way to kick it, kicky!

Green Bay Packers Are Still the King of the North