Five More Thoughts on Packers’ 18-16 Loss to the Lions 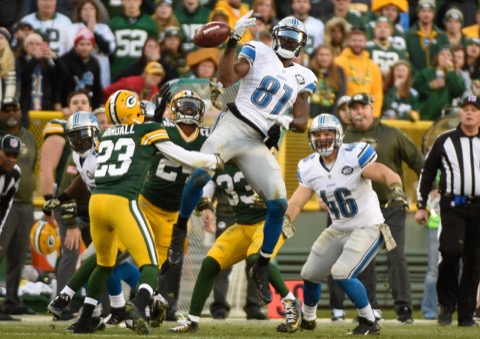 We’re still somewhat in disbelief. The Green Bay Packers’ 18-16 loss to the Detroit Lions was something… else?

First of all, let’s get this out of the way. Congrats to the Leos for ending that streak of futility in Wisconsin.

It had to end sometime. We didn’t think it would be this week, but Detroit played their asses off. Didn’t have the talent, but had the heart.

Even though they tried their hardest to be the Lions, missing two extra points, the Packers weren’t having it.

And so the better awful team won on Sunday.

And so it goes.

Jake Ryan
That’s it. Where was he? Big Mike seemingly turned the inside backer job over to the rookie last week. At least we thought. If Ryan played anything other than special teams, we didn’t see it. Meanwhile, Nate Palmer was his usual craptacular self. The lasting memory of this game — the thing that sums it right the hell up — was Palmer get juked on the sideline, falling down and then we all watched whatever Leo that was run for another five yards, when he should have gone for a short gain if any. Big Mike has been stubborn about this shit in the past — not playing rookies. Listen, Big Mike, Palmer isn’t the answer. We’ll live with rookie mistakes and watch the guy develop. Put in Jake Ryan permanently, please.

In the pocket
We’re not going to go at Aaron Rodgers right now. However, you know, we know and he knows 16 points isn’t acceptable. The biggest thing we noticed about Rodgers on Sunday was that he actually stayed in the pocket. The last couple weeks, Rodgers pretty much took the snap and then looked to get out of the pocket. We all know Rodgers is the best when he moves around and the play breaks down. The thing is, he was leaving the pocket before the play even developed. That’s not conducive to succeeding with the plays that are called. Against Detroit, Rodgers actually stood in the pocket like an NFL quarterback is supposed to do. He at least took the time to look at his first receiver, which is a nice change of pace. He might have even looked at the second once or twice. The point here is this. Even if the offensive line is bad — and they are — the Packers are only going to have success with the plays that are called if Rodgers executes them. That means going through the progressions. He wasn’t very good at it on Sunday, but at least he’s trying. Hopefully, it pays off in the long run.

Your call
Colin Cowherd brought this up. Yes, he’s a bit of a blowhard, but we’re going to give credit because it was a good point. Mike McCarthy not calling plays. Aaron Rodgers not playing particularly well. Coincidence? We really don’t know. The Packers have more problems than just the play calling and Rodgers, but this is some food for thought. What do you say? Are Rodgers’ struggles a result of Big Mike not calling the plays?

Enough of DickRodge already
If you read this site, then you know we have a healthy hatred for Richard Rodgers, AKA DickRodge. It’s not personal. The guy just can’t make plays in the passing game and he’s a liability as a blocker. As we pointed out, DickRodge came into Sunday averaging a meager 8 yards per reception. If you’re a running back, that’s great. If you’re a tight end, that’s pathetic. DR is a threat inside the 5-yard line. That, we’ll give him. He’s somehow incapable of creating any separation or breaking a tackle anywhere else on the field. So the Packers gave Long Hair, Don’t Care (Justin Perillo) some more opportunities on Sunday. He responded with five for 58 and a touch. Meanwhile, DickRodge turned in five for 32. He also had a touchdown, but those five for 32? Lowered his average yards per catch to 7.8. So, we’re pleading with you Big Mike. No more DickRodge. Let’s go with Long Hair, Don’t Care.

Just a bunch of stuff all at once
Yeah, we probably have more than five thoughts, so we’re going to cram what’s left into this last one, rapid fire. First, nice bounce-back game by Ha Ha Clinton-Dix (11 tackles and a pick). Second, it’s been three games now where the Packers haven’t recorded a sack. We’ve mentioned it before. The defense’s success is predicated on getting to the QB. Everything is based off that. The defense played well on Sunday, but they didn’t get home and you could make an argument that that was the difference in the game. We won’t, but it could be done. Third, Micah Hyde needs to learn how to make a fair catch. Fourth, it was nice to see the Packers work in Badger great Jerry Abberderry — Jared Abbrederis to the layman. Four catches for 57 yards for that guy and he somehow didn’t have to go through the usual earn Aaron Rodgers’ trust B.S. Fifth, Jeff Janis. James Jones isn’t getting open. Davante can’t catch half the balls thrown at him. We really don’t understand why Big Mike won’t at least give JJ a try. Idiotic, wouldn’t you say? Sixth, Damarious Randall — all he does is make plays. Think about it. Preserved the win over San Diego. Picked Cam Newton to give the Packers a shot against Carolina. Recovered the onside kick to give the Packers a shot on Sunday. This guy needs to be on the field ALL THE TIME. We don’t care if he gets beat from time to time. He’s a boss! Lastly, we’ll say this because this is how bad it is. The Lions really wanted to be the Lions. They wanted to snatch defeat from the jaws of victory, which is what everyone expects from the Leos. Two missed extra points. The Stafford pick late in the third, which the Packers did nothing with. The onside kick failure. The Lions served it up on a platter. The Packers just couldn’t do anything about it.