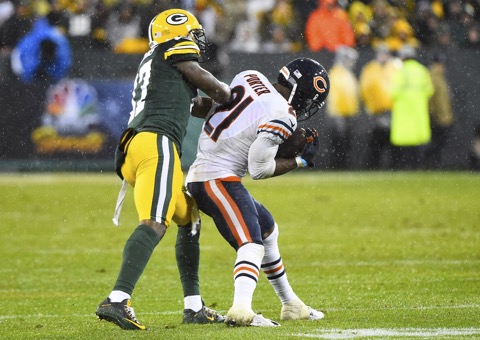 Something stinks in here and it isn’t my post-Thanksgiving farts. Well, those stink too, but the bigger stench is coming from the Green Bay Packers.

Where is that dead, rotting carcass smell coming from? Primarily from the Packers offense. And what are we going to do about it?

We have a plan and we’re sticking to it, goddamit! It doesn’t matter that it’s a plan that’s not working, by golly. It’s a plan and that’s the important thing!

We CANNNOT deviate from a plan!

Yeah, so away we go.

Whatever the Packers do from here on out, they better not play Jeff Janis more
Let’s just take a look at a couple statistics. Jeff Janis has returned four kicks this season. He’s averaging 41.3 yards per return. He’s caught two passes this season. He’s averaging 39.5 yards per reception. The guy has touched the ball six times and has gained 244 yards in those six touches. That’s slightly over 40 yards per play. I would like someone, whether they be on the Packers coaching staff or one of the buttplugs who covers the team, to come to my home and explain to me the reasons why Jeff Janis should not be on the field on a regular basis. That way, when they’re done talking, I can cock back real far and blast my fist through their fucking face.

Well, they’ve figured out the running game
This just makes me incredulous. For an entire half of the season we had to listen to how Eddie Lacy was fat. How he must be injured. How WE JUST CAN’T FIGURE OUT WHAT’S WRONG! Most of that nonsense came from the nitwits who cover the team. Meanwhile, we just looked at the stats and found the simple solution. You hand the ball to Ed 15 or more times in a game and you have a running game. Fucking amazing, right? I mean, you commit to running the football with your big, fat bruising back and that’s when you see results? Like, you mean we actually have to hand him the ball? CRAZY! So it only took the Packers until their ninth game to figure that out. And thankfully, the idiot in charge of telling the offense what to do actually stuck with it against the Bears. Although his fumble was costly, Lacy gained 105 yards on 15 carries. He also caught four for 34. Lacy’s increased utilization has moved James Starks back to where he belongs — to No. 2 on the depth chart. Starks contributed 39 yards on seven carries and 41 more on four catches. These guys are literally the only thing that made the Packers offense move. At this point, they should be an even bigger part of the game plan.

When is enough enough?
That’s the question I’m asking myself about two guys. Two guys who are clearly dogshit. Two guys who have no business being in an NFL starting lineup, much less the Green Bay Packers’ starting lineup. And yet, let’s keep sending them out there because, look, this is probably the week they’ll get it. This is probably the week they’ll make some plays. I’m speaking of receiver Davante Adams and tight end Richard Rodgers. As we documented last night, Adams is the primary reason the Packers offense was so awful. He’s like a black hole of suck, sucking everything around him in and crushing it with his pure awfulness. Eleven targets on Thursday night. Two catches. And how about DickRodge? Well, four catches for 30 yards, which is a sterling 7.5 yards per reception. This piece of shit is averaging 7.3 yards per catch this season. He couldn’t couldn’t break a tackle or get YAC if a paper bag were covering him. A ball of anger and hatred is swelling up inside of me just thinking about these two fuckwads. They are both PURE FUCKING SHIT. They have no business on our football field or any goddam other one. Bench them both! We’re way the hell past enough!

It won’t happen, but…
It’s time for a change. And I’m not talking about just sitting players who are hurting the team. I’m talking about accountability with the coaching staff. Losing a couple of games to the Denver Broncos and Carolina Panthers, I can accept. Those are good football teams. They’re clearly better football teams than the one in Green Bay. Plus, those games were on the road. Now, losing to the worst two teams in the NFC North at home, that is not acceptable. The Packers were just beaten by the Lions and Bears at home. To make it worse, they were beaten in games in which two team legends were honored — Ron Wolf (Detroit) and Brett Favre (Chicago). And do you want to know what’s worse than that? Those two teams had a combined five wins when they played the Packers. Do you know what’s going to happen now? Fat Mike will say how disappointed he is and then he’ll tell us how he’s sticking to his plan because, you know, plans can’t change. Well, I say plans can change and the Packers need to do something if for no other reason than to send the message that this shit isn’t acceptable.

And here it is
Tom Clements, you’re fucking out. Done. Gone. Finished. You got the shot you wanted. You failed. No other way to see it at this point. Clements has been a major issue in the Packers’ lack of offensive success this season. From refusing to run the football and then wondering why the Packers don’t have a running game to refusing to utilize plays and formations that get the team’s shitty receivers open, the play calling has been a disaster. And you know what? The Packers have one of the best offensive play callers in the entire league standing around, telling us about his great plan. Well, I don’t know. What to do here?