Eddie Lacy Groin Injury Not Serious, No One Cares Anyway 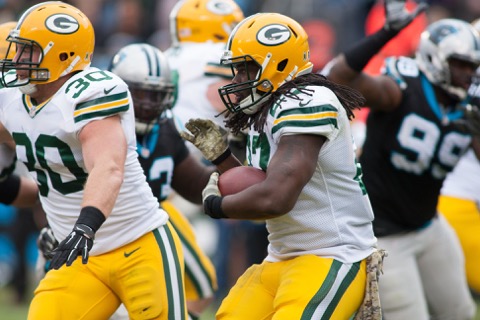 Did you notice that Eddie Lacy left the Green Bay Packers’ loss to the Carolina Panthers with a groin injury?

We didn’t. He was sucking so bad when he was in the game, we just figured the coaching staff, like us, had seen enough of Lacy. James Starks played 55 snaps to Lacy’s 19 and with good reason. Even if Lacy had made it through the game fully healthy, Starks played much better.

Although he only had 39 yards rushing (on 10 carries), Starks also had six catches for 86 yards and a touchdown. Meanwhile, Lacy’s fat ass ran five times for 10 yards and didn’t catch a pass.

What Lacy did do, besides pull up lame, was fumble the football.

As for the injury, it doesn’t sound serious.

#Packers RB Eddie Lacy missed time Sunday with a groin injury, and I’m told it’s just a pull. Will be monitored, but might not miss a game

Not that we’re sitting here pulling for someone to get hurt, but in this case, we could really care less.

Lacy isn’t producing and Starks is clearly the better back at this point.

So maybe this will make it easy for the Packers. Maybe they can actually hand Starks the ball more than 10 times in a contest and we’ll all find out what happens when you make a commitment to running the football instead of just talking about it week after week.

McCarthy: No Concern About Sideline Argument

McCarthy: No Concern About Sideline Argument