Eddie Lacy Agrees with His Demotion 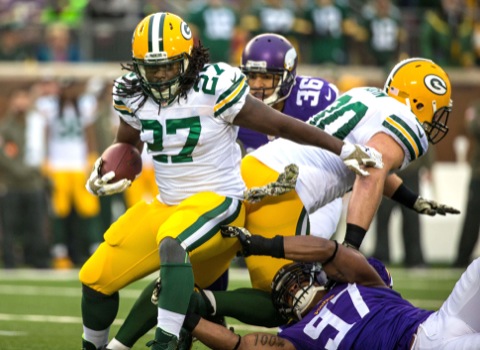 If Green Bay Packers coach Mike McCarthy demoted Eddie Lacy to the No. 2 running back on the depth chart to light a fire under his ass, it probably isn’t working.

Lacy was his usual laid-back self on Wednesday when asked about McCarthy’s proclamation that James Starks is now the Packers’ No. 1 running back.

In fact, he agreed with the move.

“As a team, we’re pretty much doing what’s needed,” Lacy said. “Going with what’s necessary at this time. This season, he’s definitely been the better player between the both of us.”

What? No HULK SMASH!?

Of course not. Lacy isn’t really that kind of guy, despite his punishing running style.

Meanwhile, everyone wants to know what’s wrong with Eddie Lacy. Well, we’ve said it numerous times. It’s hard for any back to get going when there’s no commitment to the run by his play caller.

The fact of the matter is, both Lacy and Starks have had their opportunities to run the ball limited. It just so happens that Starks has made more of those limited opportunities than Lacy.