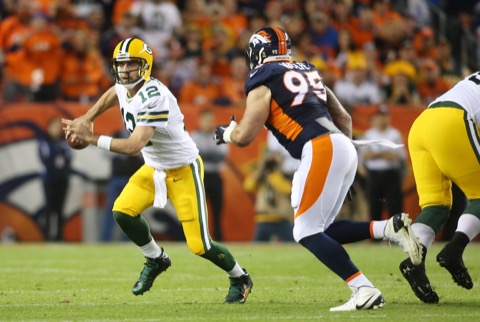 The issue with the current version of the Green Bay Packers offense is simple — receivers aren’t getting open and the play calling isn’t conducive to helping them get open.

What does the guy who calls those plays have to say about it?

“A lot of times there’s a very small area that constitutes being open,” Clements said. “At times we were, at times we weren’t. Just have to try to get open, create some more separation consistently and allow the QB to throw them open.”

It seems like Clements is suggesting that his play calls would work if Rodgers would just take some chances.

The problem is, Rodgers is averse to doing that.

He does not have the gunslinger mentality of Brett Favre. Favre would fire the football into the smallest window because he thought he could make any throw. That resulted in some great plays, but also a hell of a lot of interceptions.

Rodgers is more than happy to hold onto the ball, scramble around to extend plays and sometimes take off running. Unless a guy is wide open, Rodgers usually doesn’t bother throwing the football.

And there’s part of the problem right now.

Guys aren’t getting wide open. So the Packers either need Rodgers to take some chances throwing the football or they need to run plays designed to get guys open.

And it certainly sounds like Clements feels like his play calling is good enough as is. He’s incorrect, but he’s looking for his quarterback to shoulder some of the blame.

Let’s be honest. After throwing for a pathetic 77 yards agains the Broncos, Rodgers should shoulder some of the blame.

We think these guys need a come-to-Jesus meeting so they can get all of their finger pointing out of the way and then figure out how the hell they’re going to get back on the same page again.