Clay Matthews Demonstrates Toughness, But It Hinders Him 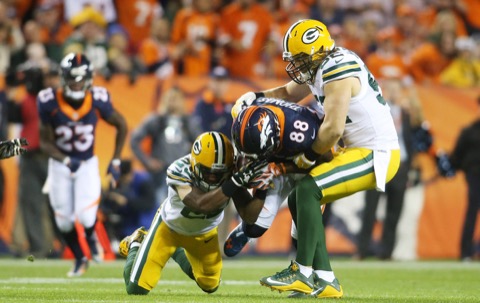 Linebacker Clay Matthews left the Green Bay Packers’ loss to the Denver Broncos in the third quarter with an ankle injury. He returned after missing only four plays.

Matthews’ injury was apparent. Cornerback Damarious Randall rolled into his ankle and when Matthews left the game, we figured he’d be taking an extended vacation like he did during the NFC Championship game.

To his credit, that didn’t happen. Matthews got taped up and was back out there in short order.

Unfortunately, the injury hindered him and you could see it, especially in coverage.

Matthews has a history of being both injury-prone and not playing through pain. Sunday’s injury has nothing to do with being injury prone. It was a play that occurs during the course of a game and nothing could have been done to avoid it.

It was, however, somewhat surprising that Matthews demonstrated the toughness to return to the game.

If this were another defender, we probably would have shrugged the return off. Unfortunately, Matthews has a reputation for not playing through pain. He’s earned that reputation, but he’s obviously trying to change it.

That’s what a leader does and it’s good to see from Matthews.

The other unfortunate aspect here is that Matthews being on the field hurt the Packers. The guy has been very good in coverage this season, but after the ankle injury, he was a liability.

What was the right call here?

The Packers obviously didn’t have a good option.

They run Matthews back out there and their pass defense suffers. That is, unless they adjust and only use him to rush the passer, but we all know Dom Capers is not capable of adjusting within the game.

They bring in Joe Thomas, who’s also really good in coverage, but then they suffer in the running game. Thomas was the lone linebacker on C.J. Anderson’s 28-yard touchdown run. He was thoroughly blocked. We wondered why there was only one inside linebacker in the game at that point — that certainly seemed like an idiotic call, but that’s beside the point.

Thomas is undersized and not nearly as good against the run as even a banged-up Clay Matthews.

The Packers could have turned to rookie Jake Ryan, but he’s not good in coverage at all.

The best solution would have been to change up the scheme and the linebackers’ roles on the fly, but again, that falls to Capers. And Capers is a man of non-action.

So now the Packers are left hoping Matthews heals quickly.