Cam Newton tore the Green Bay Packers up on Sunday to the tune of 354 total yards. Hell, if he could throw an accurate ball, he probably would have had 500 passing yards.

Thankfully for the Packers defense, Newton is about as accurate as Fox News.

Prior to the game, Newton took it upon himself to crap all over a group of Green Bay Packers fans’ day.

Mike Dobs, who lives in Fayetteville, but is from Wisconsin, was at the game with his family. One of thousands of Packers fans in that stadium on Sunday. Dobs made the egregious mistake of bringing a Packers sign with him and daring to display it. 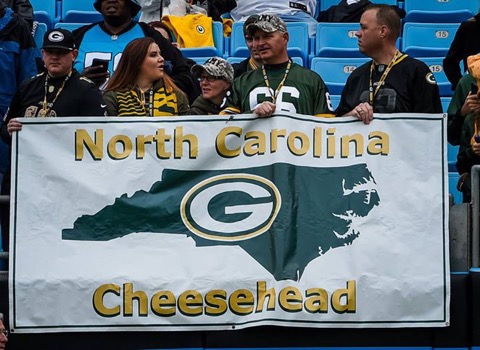 There it is — North Carolina Cheesehead — before the Panthers 10-year-old quarterback got involved.

Newton saw the sign, walked over before the game, ripped it from Dobs’ hands and handed it to stadium personnel. The sign was never seen again and Dobs was rightfully pissed (he paid $500 to have it made).

So much so that he filed a complaint with police and Panthers management.

“I was just shocked, shocked,” when Newton grabbed the banner out of Dobs’ and his family’s hands, Dobs said on Sunday evening.

“It went from a fun event to I was disgusted,” he said.

The sign was reportedly destroyed, but Panthers management has claimed they will make it up to Dobs.

As for Newton, well, don’t do anything to make manchild angry! He will crap all over your day because he’s a big tough guy!

“That don’t match. I feel it’s my due diligence to protect this house,” the Gaston Gazette reported. “We played in Green Bay last year and I didn’t see no ‘Panther Country’ signs up there.”

One, that’s because no one outside of the Carolinas likes the Panthers, you nitwit, and two, “protecting this house” involves you ruining someone’s experience who paid hundreds of dollars to see you play? Really?

That pretend S you have across your chest under your jersey has a P and an O in front of it, doesn’t it?