Andrew Quarless is Coming to Save the Day! 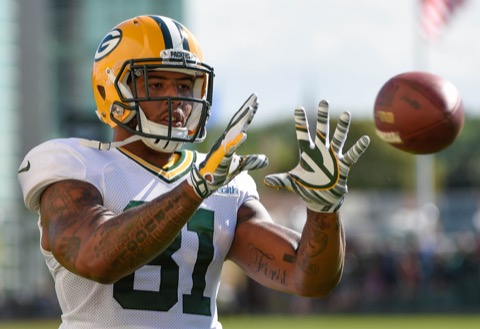 Quarless can begin practicing after serving his six-week stint on injured reserve. He sprained his MCL against Kansas City and the Packers used their IR with designation to return option on him.

Although he has to be medically cleared, the rules dictate Quarless can begin practicing this week. He isn’t eligible to play for another two weeks, so the soonest he’d get on the field again is on Thanksgiving.

The Packers will have to create a roster spot for God’s Gifts then, if they decide he’s healthy enough. Their other option is to send him back to injured reserve for the remainder of the season.

In Quarless’ absence, Richard Rodgers has taken virtually all of the snaps at tight end, although the Packers started to work Justin Perillo in more against Carolina.

As we’ve noted several times, Rodgers is a poor excuse for an NFL tight end. While he caught two touchdowns on Sunday, he only tallied 19 receiving yards on his five receptions. That’s a 3.8 yard average, which many NFL running backs post better per carry numbers than.

That Herculean effort of suck lowered Rodgers’ already poor yards per reception average from 8.9 to 8.0.

We all know God’s Gifts isn’t anything more than mediocre, but at least he can run more than 10 yards when he catches a football.

Previous Article
Well of Course it’s the Curse of Ditka!
Next Article
Packers Aren’t Ready to Hand Anything to Jake Ryan