by Monty McMahon
in Uncategorized
120 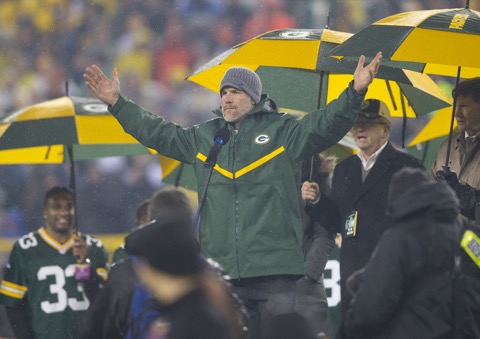 A week after thumping the Minnesota Vikings, the Green Bay Packers went right back to their pathetic ways of late, dropping a 17-13 decision to the Chicago Bears.

Not even Brett Favre having his number retired inside Lambeau Field made a difference for the Packers, who dropped their second game in a row at home.

Although they didn’t play great, the Packers defense once again played well enough to win the game. It was almost a replay of the Detroit game.

The pass rush didn’t get off and the D didn’t create any turnovers, but they only gave up 17 points and that should be good enough for the Packers to win a game.

Should is obviously the operative word here.

The Packers offense was a flaming pile of shit once again and that was the difference in the game.

Even though the Packers ran the ball effectively, with 105 yards from Eddie Lacy and 39 more from James Starks, the passing game couldn’t make anything happen.

Aaron Rodgers wasn’t sharp, but his receivers were a joke.

Randall Cobb was the only receiver who made anything happen. Cobb had six catches for 74 yards.

The Packers next-best receivers were Lacy and Starks.

James Jones put up a bunch of zeros. Davante Adams caught just two balls for 14 yards, but he was targeted a team-high 11 times.

When the Packers try to make Adams the focal point of the passing game, they fail as a team. Again, see the Detroit game.

That’s because Davante Adams suckles on the back of a donkey scrotum.

In order to climb out that hole, the Packers needed a huge play by their defense or Aaron Rodgers. The defense couldn’t deliver it.

Rodgers did his best, driving the Packers to the Chicago 8, but his shitpile of a receiving corps couldn’t make a catch for him in the end.

And there the Packers’ hopes died on fourth down with 29 seconds left.

Their chances of winning the NFC North probably died with them.