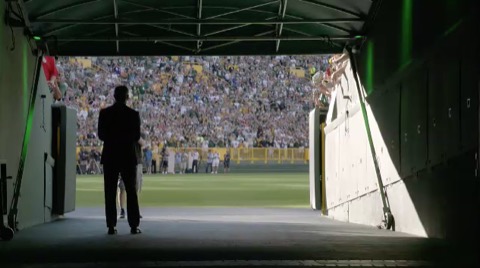 Brett Favre will have his name unveiled on the facade of Lambeau Field on Thanksgiving night, becoming one of only six players in the Green Bay Packers’ storied history to have his number retired.

That’s sure to conjure up plenty of emotion in plenty of people. It will probably be a feel-good moment for most — the acknowledgement of a great career and the capper to a saga that divided Packer Nation.

But if you find yourself wanting more Brett Favre, you’re in luck. NFL Network is launching their new series, NFL Timeline, on Dec. 3 with a piece called Favre Returns. It’s not a highlight reel, but a retrospective of Favre’s last few years in Green Bay, the divorce and the reconciliation (if you want to call it that) with the Green Bay Packers.

It culminates with Favre’s induction into the Packers Hall of Fame and will also include footage of whatever happens on Thanksgiving.

We got an advance look at the piece and, as with most NFL Films stuff, it has great behind-the-scenes footage and interviews.

I can also tell you it takes you through the full range of emotions.

From, “man, I really loved watching that guy play” to “what a despicable, selfish son of a bitch.”

Such as when he explains signing with the Vikings by saying this.

“I wanted to play for anyone who would play the Packers. Minnesota played them twice.”

In the end, Favre says he always was and always will be a Packer, but that’s a convenient narrative.

For me, Brett Favre will always be the guy who stuck a knife in our backs. He was a great player for the Green Bay Packers, but, unlike some people, I will not ever be pretending he didn’t go play for the lowliest of the low Minnesota Vikings out of anything other than some misguided sense of retribution.

That will always be my lasting memory of Brett Favre.

In case you need a refresher course, check out Shawn’s three-part retelling of the Brett Favre saga here.

Finally, here’s the trailer for the episode.