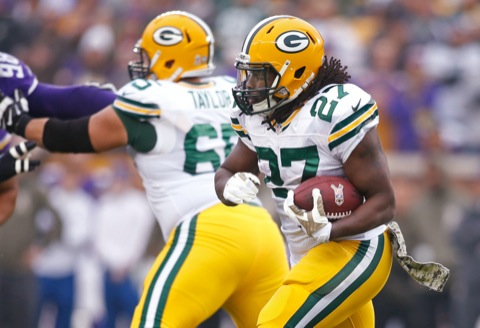 People are hell bent on figuring out what’s “wrong” with Lacy this year, though. So they ask him stuff like, “Ed, what’s the deal?!”

Ed knows some people think he’s fat and Ed says that isn’t the reason he isn’t tearing it up. He says there’s another reason and you’ll never guess what it is.

“Watching film, I noticed I would take a hit and I would break the tackle, but I would break it sideways, which allows other people to come tackle me vs. in years past my pads would be low, so when I take the hit, I’m still moving forward,” Lacy said. “It’s just getting my pads down and getting back to basics.”

Know what he identified there?

I’ll give you a hint — it’s Mike McCarthy’s No. 1 reason for any failure of the Green Bay Packers.

As Big Mike would say, “Gotta correct that pad level.”

And now that Ed knows his pad level is not correct, he will surely go out and run for 150 yards every week.

Your Latest Reminder that Charles Woodson is Washed Up