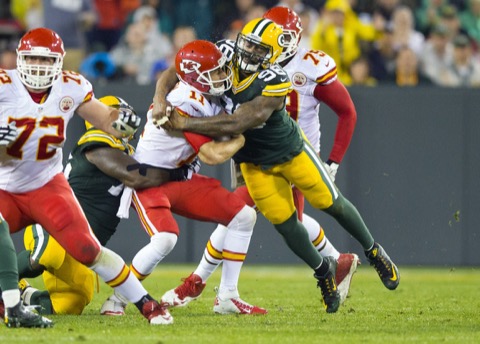 I noticed something odd in the box score this week. It was defensive end Mike Daniels’ stat line.

It looked something like this (depending on where you get your stats): 8 tackles, 1 for loss, 2 QB hits, 1 hurry.

Nothing gaudy there with sacks or turnover plays, but a damn solid and active effort. There’s a guy who was disruptive.

What jumps out are those eight tackles, seven of which were solo.

Inside linebackers and safeties are supposed to make eight tackles a game. Guys who play 3-4 defensive end are not.

Guys who play 3-4 defensive end are supposed to occupy blockers so the guys behind them can fill gaps and make tackles, but Daniels just had one of those games. He beat his man so often, he was borderline dominant.

So why welcome back?

Because as good as Daniels was against the Rams, he was just as invisible against the 49ers the week before.

Look at that stat line and you’ll see nothing but goose eggs. Seriously, Daniels didn’t register a single statistic against San Francisco. It’s as if he didn’t even play the game.

So what happened this week?

We couldn’t say exactly, but we imagine Daniels is well aware of his play. Meaning he knew he sucked it up in week 4 and came out with something to prove in week 5.

If the Packers could get that sort of production from Daniels every week, their fairly stout defense would be even better.

As it is, even with the no-show in San Francisco, Daniels is on pace for a career season.

At his present rate, Daniels will finish with 57 tackles and eight sacks. That would best his current career highs of 41 tackles (2014) and 6.5 sacks (2013). He’s also notched his first career forced fumble this season.

Part of us is like, “Well, typical. It is a contract season for the guy.” And the other part is, “Mike Daniels is turning into a beast!”

We’d like to forget about the contract year and just go with the latter. However, Daniels needs to show up on the stat sheet every week and prove that week 4 was the exception and week 5 is much closer to the rule.