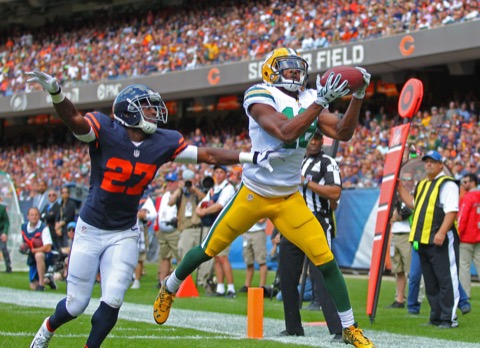 It appears the Green Bay Packers have been down to one viable receiving option lately. That option is Randall Cobb and opposing defenses know it, so they’re giving Cobb a nice healthy dose of the double team.

That has Cobb frustrated.

“It’s definitely frustrating,” Cobb said. “But it’s part of the game, it happens. I’m sure Jordy felt like this at times last year. But the more guys make plays around us, the harder it will be for teams to do that. That’s why we need everybody making plays.”

And that’s just it. Guys aren’t making plays because they’re not getting open.

Things got tougher for the Packers when Jordy Nelson went down in the preseason. Then Davante Adams sprained an ankle, which has kept him sidelined for nearly three full games.

Quarterback Aaron Rodgers said Adams is the key to the offense, meaning the key to getting Cobb open again. Adams’ presence on the outside — and his production — should mean fewer double teams for Cobb and thus, more opportunities.

But there are others guys, you say!

Yes, James Jones has been great. He’s putting together a career season, but Jones hasn’t been getting the separation and winning the one-on-one matchups consistently in recent weeks. If you remember Jones’ long touchdown in week 5, you also remember that the guy covering him fell down on the play. Jones had just one other catch on the day, so despite the big gain, it wasn’t a very productive one.

There’s now word that Jones is being slowed by a sore hamstring.

Then there’s rookie Ty Montgomery. He’s being worked in more on offense, but has just 13 catches for 125 yards. That lackluster stat line is a clear indication he’s not getting open enough, but that’s to be expected. He’s a rookie.

The Packers have two other receivers on the roster — Jeff Janis and Jared Abbrederis — who they won’t even put in the game. And then there’s tight end Richard Rodgers, who’s averaging under 10 yards per reception. He’s averaging 8.2, to be exact.

The Packers’ opponents can pretty much not bother covering Rodgers at all and they’ll be just fine.

The short answer to these problems is the Packers need Adams back on the field. They also need some of these youngsters to show improvement, though.