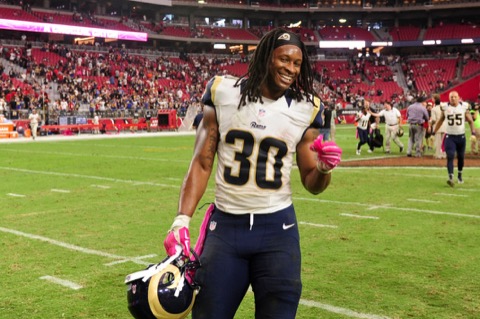 Shawn (4-0) — We’ve heard so much about the St. Louis Rams defense coming to town this weekend that you’d think they were the reincarnation of the ’85 Bears or the 2000 Ravens, or at least the 2013 Seattle Seahawks, or at the bare minimum a top 10 defense this season.

Wrong. They aren’t even that.

The mighty St. Louis Rams rank 16th in total defense. They rank a slightly better 13th in points allowed. While ranking 14th against the pass, the Rams’ real weakness on defense has been the run, where they rank 26th, allowing over 120 yards per game. That is a troubling weakness when you are facing the third-ranked rushing offense in the league at their house.

What might be more troubling for them is despite their 14th ranking against the pass and gaudy 17 sacks, opposing quarterbacks have an average QBR of 93.4 against them. So, despite all the sacks, they have failed to generate the kind of pressure to get QBs off their game. They will need to this Sunday or don’t bother making the trip.

Sure, the Rams have talent on defense, especially on their defensive line and we are only four games into the season. That is plenty of time for them to climb among the best defenses in the league. Still, the numbers aren’t matching the hype right now and now the Rams are tasked with stopping a Packers offense that, frankly, has rolled through every challenger that has stepped in Lambeau Field since 2013.

What we haven’t heard much about is the Packers defense. They ranked eighth in the league in total defense, twice as good as the Rams right now. And while they have also sacked the quarterback 17 times, that has resulted in an average QBR of 74.6 for their opponents. That is fourth best in the league, in a stat that Dom Capers specifically targets.

The Packers defense also has the advantage of playing at home where the crowd will help them get off the ball, and most importantly, they face a Rams offense that ranks dead last in total yards so far this season. That’s right. 32nd. The Browns and Texans think that’s pretty shitty.

The Rams are led by Nick Foles, who was mostly brought in to be smart with the football and maybe make a play once in a while. I expect the Packers to get after Foles early and often. Foles did have a decent day two years ago in Lambeau, but he faced a lesser defense and had the benefit of no Aaron Rodgers on the opposite sideline to add pressure.

Todd Gurley could help Foles’ task immensely if he is able to consistently get yards, but despite last week’s final number of 146 yards, Gurley was NOT able to do that. He had two yards at halftime and 38 yards going into the 4th quarter. Gurley exploded in the 4th quarter, but the Rams will likely need more production from him in the first three quarters to stay in this game.

As far as I see it, the Rams have about the same chance to beat the Packers as the Chiefs did. They need to get enough pressure on Rodgers to get him off his game and they need to run the football well enough so that Foles doesn’t have to do too much. If they can get 120-plus yards from Gurley and five sacks or more, they can win the game. It wouldn’t hurt if Tavon Austin made a play on special teams either.

I don’t see it. The combination of Lacy and Rodgers will be too much for the Rams to do any better than Seattle, who held the Packers to 27 points. The Packers have been strong against the run and I expect that to continue. They will stuff the run and get after Foles. The Packers jump out to the early lead once again. The Rams will do well to keep it within two scores for most the game, but it won’t be enough.

Andrew (3-1) — Andrew is diabolically formulating a plan right now. Or maybe he’s just sitting on his couch staring at the wall.

Monty (4-0) — I’m kind of bored with this game already and it hasn’t even started.

Here’s what I don’t get. The Rams get the same kind of fluky win they get every season last week at Arizona and suddenly, everyone has them as a top 10 team in the league.

Well, you know what? A lot of people are fucking idiots. I think approximately 75 percent of those idiots are paid to talk about football.

The Rams are fucking 2-2. Their defense is alright — the numbers say perfectly average, in fact. Their offense is garbage. Worst in the league garbage.

That win last week against Arizona was the ONLY time their offense showed up this season.

So now they’re an offensive juggernaut all of a sudden? I think not.

The Rams get wins like they had last week every season. They were beating Seattle when they had no business beating Seattle in past years and everyone was like, “Well, the Rams have arrived!”

No, the Rams had not arrived. They have never arrived. And they have not fucking arrived now.

Meanwhile, you’ve got the Packers playing at home. They likely will have a key cog in right tackle Bryan Bulaga back in the starting lineup.

The Packers haven’t lost at home in over a season and a quarter. Bulaga shores up their pass blocking tremendously.

Plus, what everyone assumes is a weakness — the Packers’ run defense — actually appears to be a strength now. B.J. Raji is playing like a man and Letroy Guion, who just returned from suspension, will make that unit even stronger in the coming weeks, once he knocks the rust off.

Throw in Aaron Rodgers and a great running game and I don’t even see how this game is close.

Maybe Jeff Fisher can out mustache Mike McCarthy and that will keep it to a single-digit deficit for the Rams. I’m really not sure that Jeff Fisher’s mustache has those sort of magic powers though.

I mean, it’s a magnificent mustache. Glorious, even, but I think it’s just some hair and food particles.