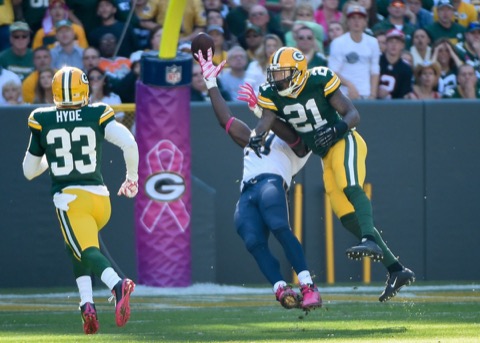 We — and everyone else — have been blathering on about the Green Bay Packers defense.

Because this is Green Bay. The Packers haven’t played defense since the 1990s, but they’re playing some this year!

What kind of defense?

The Packers have the seventh ranked defense in the NFL following Sunday’s week 5 games. They’re giving up an average of 316.4 yards per game.

Yes, the fourth-worst run defense in the league, but what did you expect?

They just gave up 191 to the Rams and they gave up 189 to the Bears in week 1. Eliminate those two games and the Packers’ run defense is pretty good, but those two displays were atrocious.

So what’s with that run defense? Are those awful games an aberration?

The Packers lost Sam Barrington in week 1 and were forced to insert an unprepared Nate Palmer against the Bears. Palmer has looked better since. They lost their run defense anchor, B.J. Raji, against the Rams. We don’t yet know how that’s going to play out.

Injuries have played a part in those games. Otherwise, the Packers have been more than serviceable against the run.

Raji wouldn’t be as easily replaced as Barrington was, however.

Can The Packers Win With Defense