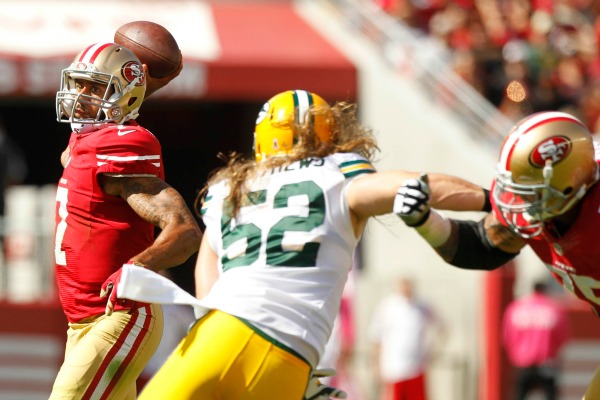 The Green Bay Packers earned their second victory on the road by stuffing the San Francisco 49ers all day long in a 17-3 win that vaulted the Packers to 4-0 for the first time since the greatest streak in franchise history in 2011.

Most were pretty confident the Packers would go to San Francisco and get a win today, but most were confident because of Aaron Rodgers and the Packer offense. Wrong. From the very first play of scrimmage, when Rodgers rolled to his right and threw deep to a streaking Ty Montgomery only to have the ball bounce harmlessly off his hands, we had the feeling it was going to be just one of those games for the offense.

Drops, holding penalties, inaccurate throws, and Don Barclay all conspired to give the offense fits. Even Mason Crosby shanked one before half to join the fun. However, in the second half, the offense got the running game and the short passing offense going. Eddie Lacy’s 90 yards on 18 carries, and James Jones, Randall Cobb and Richard Rodgers with 5 catches each were enough to lead the Packers to scores on their first two possessions in the 2nd half.

The defense took it from there.

Packer Nation has been waiting for a defense that can win games when the offense is off, and today we saw it. In fact, if I could have found a picture of Dom Capers giving the middle finger to the haters, I would have.

Can’t stop the read option? Check out the 2nd half of this game when the Packers smothered it. Can’t stop Colin Kaepernick? It wasn’t even a fair fight today. The Packer D harassed him all day, sacked him 6 times and got a pick from Sam Shields.

How about these stats? The Packers rushed for 162 yards. The 49ers rushed for 77 with Kaepernick getting 57 of it, most of that on the read option in the first half. The 49ers totaled only 196 yards all game. I can’t even remember the last time the Packers held a team to less than 200 yards. A quick internet search suggests December of 2012.

The Packers’ front 7 is for real. Carlos Hyde never got going, suffering the same fate as Marshawn Lynch and Jamaal Charles before him. He finished with a mere 20 yards rushing. Meanwhile, every outside linebacker on the Packer roster got a sack. A suddenly bullish Nick Perry got two. Clay Matthews, Julius Peppers, Jayrone Elliot and Mike Neal all got one each. HaHa Clinton Dix led the team with 7 solo tackles and had his best game of the season so far.

It helped that Colin Kaepernick was as scattershot as a drunk with a 12 gauge and also had the mysterious tendency to hold the ball and run around aimlessly until sacked. But whatever. That is San Francisco’s $114 million problem. Chicago and them can join a focus group together or something. Regardless, that is a dominant defensive effort on the road.

At this point of the season, it is all about Ws, and that is 4-0 for the Packers.