Packers Hang On in Crazy Game for 5-0

by Shawn
in Uncategorized
41 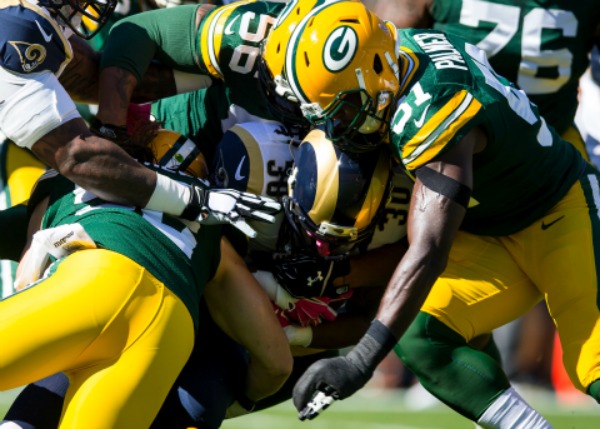 It wasn’t pretty. In fact, it was downright bizarre. Yet, the Packers kept the longest home winning streak in the NFL alive, and their undefeated season rolls on with a 24-10 win over the game St. Louis Rams.

At the start, it looked like it was going to be another blowout at Lambeau Field. The Rams came out blitzing and ended up giving up an easy touchdown to Ty Montgomery on a blown coverage. A couple drives later, Nick Foles attempted to throw the ball while being dragged down by Datone Jones, and Quinten Rollins picked it off and returned it 45 yards to the house to give the Packers a 14-0 lead in the first quarter.

Like every other game at Lambeau so far this season, the Packer defense came out flying. They were getting some serious hits on Foles and stuffing Todd Gurley at the line. And then… they weren’t.

The game seemed to turn after Jeff Janis ruined a perfect punt by Tim Masthay – yeah, I just wrote that – that seemed destined to bottle up the Rams inside their own 3-yard line. Janis’ gaffe let the Rams start at their own 20 instead. With Foles already having thrown two picks, the Rams kept the ball on the ground, and the Rams offensive line and Todd Gurley responded. Nine runs and a 32-yard interference call on Ha Ha Clinton-Dix later, it was 14-7 and the Rams would largely dominate both lines of scrimmage from there.

If you’ve been exposed to any media at all, then you have heard probably 20 times by now that Aaron Rodgers’ streak at home with no INTs has ended. In fact, after a deflected ball and diving interception ended the streak, Rodgers piled on by throwing a worse pick on a stop to James Jones that the defender was sitting on. That led to a FG for the Rams and a 14-10 game at half.

Starting with the ball after half, it looked like the 2nd half might be different for the Packers offense when Rodgers hit James Jones on a post that went for a 65-yard touchdown after Jones’ defender fell down. That play, however, would be an aberration.

The Packers offense continued to struggle to move the ball, and the Rams continued to batter away at the Packers defense with Todd Gurley. With B.J. Raji out with an injured groin after halftime, the Packers were being pushed back off the line of scrimmage, and Gurley began to break off longer runs.

Yet, even with the Rams dominating both lines of scrimmage, both teams seemed almost cursed to not put up any more points, leaving the score 21-10 well into the 4th quarter.

The Rams missed two field goals and had a third blocked by Datone Jones. The Packers had a field goal wiped off the board by a penalty on Richard Rodgers.

Despite each offense getting great field position after these events, neither offense could capitalize. The Rams could run, but they couldn’t pass. The Packers couldn’t run, and they couldn’t pass much either. Ultimately, Nick Foles was the difference. Aaron Rodgers was off his game, but Foles doesn’t have a game to begin with.

Foles finished with four interceptions on the game, including a back-breaker in the end zone after Gurley broke off a 55-yard run. Foles’ third down pass went through the hands of Joe Thomas, off the helmet of Rams tight end Lance Kendricks, and then into the diving arms of Ha Ha Clinton-Dix.

After the Rams mysteriously tried a FG from midfield and missed, the Packers managed to drive 30 yards for a FG that would set the final score at 24-10.

Fittingly, the Rams final good shot at a score just resulted in another red zone interception, the second of the game for Quinten Rollins.

Style points at this point in the season mean exactly nothing. The bottom-line in week 5 is to get the W and stay healthy. The Packers managed half of that goal.

T.J. Lang (knee), B.J. Raji and Nick Perry all left the game for the Packers with injuries. Lang’s loss didn’t help the struggling Packer run game, and the loss of Raji and Perry immediately hurt the Packers at the edge against the run.

People thought the Rams could stay in this game due to their front four. Not really. They managed little pressure all game and finished with two sacks with one of those coming on an ill-advised scramble by Rodgers.

However, what the Rams could do was bring their safeties up to aggressively play the run and short passing game. It worked. Safeties continuously helped out in holding Eddie Lacy to 27 yards on 13 carries, and the tight underneath coverage caused Rodgers to constantly hold onto the ball and look to scramble. Rodgers would end up leading the team with 30 yards on eight runs, which is a negative and not a positive.

With Jordy Nelson out, the Packers can expect to see more defenses aggressively attacking the line of scrimmage as the Rams did. Aaron Rodgers and Tom Clements are going to need to go back to the drawing board and figure something out. At the same time we can only hope that the failure to stop the run was an anomaly fueled by injuries, too much time on the field, and a special running back. Regardless, obviously the Packers have plenty to work on.

In the meantime, the defense helped the Packers gut out another win,  and we’ll keep focused on the bottom line, which abides on the scoreboard. Packers 24, Rams 10. 5-0.