Packers Getting a Different Colin Kaepernick This Time 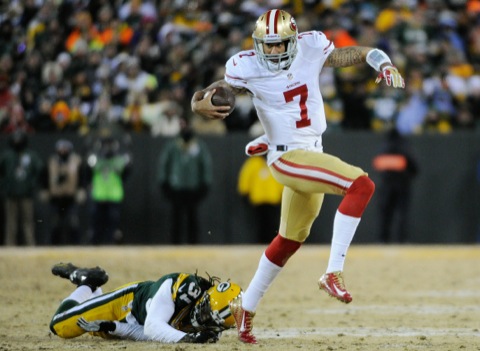 You know how it’s gone the last few times the Green Bay Packers have faced Colin Kaepernick and the San Francisco 49ers. Three games, three losses and some rather embarrassing moments where the Packers made Kaepernick look like a superstar.

There was the 2012 Divisional playoff game where Kaepernick ran for 181 yards. Then the 2013 season opener, where he passed for 412 yards and three scores. Then in the 2013 Wild Card game, Kaepernick came to Lambeau and passed for 227 and ran for 96.

Even though the 49ers weren’t great last season, I think we were all just fine with not seeing them on the schedule.

This year is a different story.

After throttling the Vikings in week 1, the 49ers have fallen back to earth. Hard.

They’ve suffered two consecutive losses — at Pittsburgh and vs. Arizona — by a combined 65 points. Plenty of that is on the defense for giving up 90 points, but Kaepernick and the offense only scored 25 in those two games combined.

An offensive juggernaut they are not.

Kaepernick isn’t exactly setting the world on fire individually, either.

On the season, he’s 59-of-91 for 567 yards, two touchdowns and four interceptions. He’s rushed for 138 yards on 23 carries, scored once and fumbled twice.

Although it’s clear Kaepernick is still dangerous running the football — and we know the Packers have had their issues with the read option — he hasn’t done much as a passer.

In fact, he’s coming off the worst game of his career. Kaepernick was 9-of-19 for 67 yards, no TDs and all four of those interceptions against Arizona.

The Cardinals returned two of those picks for scores and it sounds like they knew what was coming.

Cardinals safety Tyrann Mathieu said the 49ers’ passing game “has just simplified so much. It was easy for us to anticipate routes, get some good breaks on the ball.”

So what’s the concern level?

If the Packers can reasonably contain the read option, then it isn’t high at all.

These are not Jim Harbaugh’s 49ers.

Big Mike Doesn’t Think Much of Your Read Option QBs