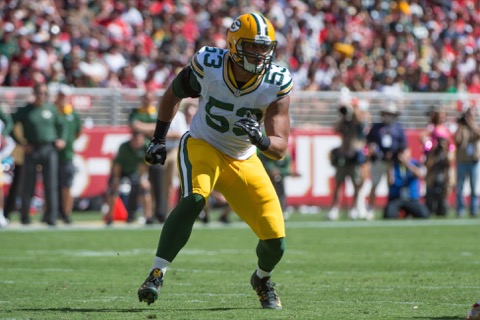 It seems like the news could have been much worse here considering linebacker Nick Perry was last seen with his arm in a sling. Perry, who injured his shoulder in the Green Bay Packers win over St. Louis, will miss 2-4 weeks.

Perry suffered a sprained AC joint in his left shoulder. That’s the same injury Randall Cobb suffered in the third week of the preseason.

Cobb missed only that final preseason game and has played since, although not at 100 percent.

That gives us a clue that Perry’s injury is a bit more severe. However, he could still miss only one game — the Packers have their bye after playing the Chargers this weekend.

This is unfortunate for Perry for a couple reasons.

First, he’s having his best season in — surprise! — his contract year. Perry has 11 tackles and 3.5 sacks through five games. Both of those numbers are on pace to surpass his career highs. His 3.5 sacks are third on the team and only a half sack away from his career high of four sacks, set in 2013.

Second, this is familiar territory for Perry. The guy hasn’t played a full season for the Packers since being drafted in the first round in 2012. He’s missed a total of 16 games — one full season — over his first three years in the league with various injuries.

In 2014, when Perry played in a career-high 15 games, he did so with an injured right shoulder which required surgery after the season.

In short, the guy is injury-prone.

It’s pretty much only a matter of time before he goes down again.

It’s too bad it happened when Perry was actually finally making an impact.

Nothing Official, But Players Talking Like Richardson is Done