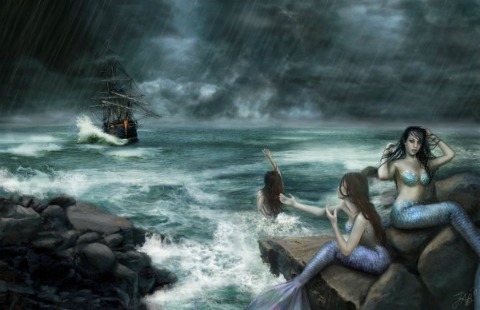 In classical mythology, sirens were typically depicted as beautiful women or mermaids who lured nearby sailors from outcroppings of rocks with their singing. The sailors would become enchanted with the sound and crash their ships into the rocks.

There have been a lot of GMs crashing their ships lately, as will always be the case in the NFL.

What do the Chicago Bears, Detroit Lions, Baltimore Ravens, Miami Dolphins, and San Francisco 49ers all have in common, besides losing records? They all overpaid for their quarterback, and in doing so, they set their ship on a course to crash.

Some did it out of simple fear. The Chicago Bears threw $127 million and $54 million guaranteed at Jay Cutler because the thought of going 4-12 was far scarier than the thought of mediocrity. In a place like Chicago, mediocrity might buy you four or five years as GM. The Bears certainly knew what they had in Jay Cutler. They weren’t motivated by what they had in Cutler; they were motivated by what they may not have if they lost him.

I remember reading an article that interviewed a couple NFL scouts and executives regarding the Cutler contract, and nearly all of them agreed with the Bears’ decision at the time. Like the Bears’ management, the scouts and executives also feared the task of replacing Cutler. Apparently, replacing even a proven mediocre quarterback was in their minds a monumental task.

But is it really that hard? I see guys like Russell Wilson taken in the 3rd round, or a guy like Brett Hundley taken in the 5th round, and I question whether it is really that difficult to find a decent quarterback. Keep in mind that if you aren’t paying your quarterback big money, then you don’t need to rely on him to win. You have the money to invest in a top defense and running the football. Make good decisions there, and you won’t need to find an Aaron Rodgers in the draft.

Regardless, the results speak for themselves. Everyone in Chicago who was associated with Cutler’s contract is gone, well, except for Cutler himself. Thanks to the Bears including guaranteed base salary in 2014-2016 as part of the deal, Packer fans can be content knowing that Jay Cutler is likely to be the Bears’ quarterback through next season. The Bears would have to be willing to part with $13 million in dead money if they were to waive him even next season. Since that guarantee is salary and not an already paid bonus, the Bears could trade Cutler and erase some of that dead money, but good luck finding a team willing to trade and pick up that money.

I would say the Atlanta Falcons with Matt Ryan, Dallas Cowboys with Tony Romo and the Cincinnati Bengals with Andy Dalton also overpaid their quarterbacks due to the same motivation. Their GMs knew what they had, but they preferred to pay a premium for the status quo rather than risk a complete collapse. Similar to the Bears, all three initially erred with the same strategy: attempt to turn an above average quarterback into an elite one by putting elite weapons around them.

The problem with that is a good quarterback does not become a better one by simply throwing the football more. By putting more of their success around the performance of their quarterback, they were just guaranteeing more of the same.

However, since then, unlike the Bears, all three have seemingly realized that success with their current quarterback wasn’t to be found via trying to make him into something he wasn’t. Success was to be found by improving other areas of the team and asking less from the quarterback. All three have developed good offensive lines, running games and are improved on defense, and therefore, they now have a shot to reverse their fortunes.

The other overpaid quarterbacks on my list became that way not out of fear but because of the siren song their GMs became enchanted with. For Matt Stafford, Joe Flacco, Ryan Tannehill and Colin Kaepernick, their GMs gambled on potential over productivity.

First Wizard’s Rule is people believe what they want to believe. When a GM spends a high draft pick on a quarterback, they want to believe that guy is going to be a franchise quarterback. Just based off the rule, it doesn’t take too much for the GM to believe it. If that quarterback flashes any potential and delivers any success at all, then the GM is likely to give in to their demands and pay a premium if need be.

Matthew Stafford was a monster in 2011 with over 5000 yards passing and 41 touchdowns. Apparently that was so persuasive that a fall back to earth season in 2012 with 20 TDs and 17 INTs didn’t stop the Lions from throwing $42 million guaranteed at Stafford. Like other teams before them who threw big money at their quarterbacks, the Lions then tried to load up on offensive weapons so that his productivity could match his salary.

It hasn’t worked. The Lions were competitive and made the playoffs last season due to a good defense, but salary cap issues led to most of the Lions’ vaunted defensive line leaving in free agency. Now the Lions don’t have a great defense. They don’t have a great running game, and Stafford is the same old guy. He counts $22 million against the cap next season, which is more than Aaron Rodgers does. With $11 million in dead money on the books, the leverage is on Stafford’s side for any renegotiation. To lower his cap number, the Lions would likely need to push more guaranteed money into future years, which essentially would be like doubling down on a bad contract.

Tannehill and Kaepernick have both killed off one coach and the GM that gave them big money could be soon to follow. Both are young guys that have shown flashes, but neither have been successful without good defenses behind them. Both look overpaid right now, but at least due to their youth, the jury is still out.

The Ravens and one of the better GMs in football- Ozzie Newsome- have probably the best excuse for falling for the siren’s song and wrecking. Joe Flacco not only managed to win a Super Bowl in his contract year, but he also played the best football of his career during the playoffs. It helped that he could just throw it up for grabs and Anquan Boldin would come down with it. Curiously, the Ravens let Boldin walk the same offseason they threw huge money at Flacco. Flacco and the Ravens have not been as good since, and this year, they have bottomed out, which is actually better than merely being mediocre. If you are going to be bad, then be really bad and get a top ten pick. That gives you the best chance of getting a great player for three or four years for cheap. When you are paying your quarterback huge money, those are the kind of playmakers you need- cheap ones.