Look At All the Career Years in Green Bay 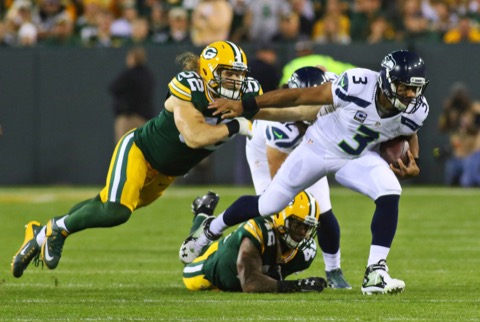 My high school track coach, the great Greg Lechleitner, used to say that what you needed to really be great at a team — or in our case, to beat Peshtigo, which had about five times as many kids — was to have your great performers perform up to their capabilities and a few of your younger, unproven performers to reach a higher level.

And you can see that going on with the Green Bay Packers this season, perhaps more than ever.

That’s the natural progression for a lot of guys. What’s surprising with the Packers is they’re not all youngsters.

I’m looking at you James Jones and you, B.J. Raji.

We’ve already singled out a couple guys — defensive end Mike Daniels and linebacker Nick Perry. Today, we’re going to break them all down.

On Pace For
Interceptions: 6

On Pace For
Tackles: 112
Interceptions: 3

On Pace For
Tackles: 76
Interceptions: 3

A lot of things going on here.

Some guys’ stats were going to improve just because they’ve been given a larger role on the team. Guys like Richard Rodgers, Jayrone Elliott and Mike Pennel.

Other guys are in contract seasons. They’re denoted with the asterisk. So, of course they’re going to be motivated to play well.

A couple guys have seen their playing time and thus, their stats, balloon because of injuries to other players. Micah Hyde and Nate Palmer fall into that category.

Then there are just guys who are playing better than they ever have in certain areas. Clay Matthews, Sam Shields and Ha Ha Clinton-Dix fall into that category.

You probably also noticed something else.

Most of these guys play defense.

Encouraging News for Both Raji and Perry