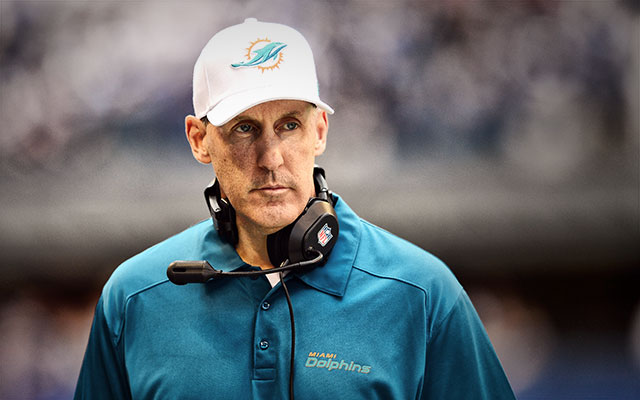 If you have been plugged in this morning, then you already know that the Miami Dolphins didn’t wait any longer to fire head coach Joe Philbin. Reports have not made it clear whether Dolphins’ owner, Stephen Ross, waited until Philbin got back onto American soil or if he made him fly coach back to the States.

Four years ago Joe Philbin had a cushy job as Mike McCarthy’s personal assistant. That is essentially what an offensive coordinator who doesn’t call plays is. Still, Philbin had the good fortune of being associated with the Packers’ 2011 offense, which at that time was the 2nd highest scoring offense in NFL history with only the run-up-the-score 2007 Patriots having scored more points. That association apparently was enough to convince Ross that Philbin was the man to help resurrect a franchise that frankly hasn’t been relevant since Dan Marino was slinging it.

Philbin never had a winning season as a coach, and the Dolphins had the unfortunate habit of getting worse as the season went on during his tenure. However, Ross’ response to that was to double down by extending Philbin and handing quarterback Ryan Tannehill and free agent Ndamukong Suh huge contracts.

In the end, all that did was raise expectations for the team. Miami fans got a clue that this season wasn’t going to go like they hoped when the Dolphins struggled to narrowly beat the Washington Redskins in Week 1. That would be as good as it would get for Fins fans. The Dolphins lost to the Division II team Jacksonville Jaguars in Week 2 before getting trounced in their home opener by the Buffalo Bills. A trip all the way to London to not even show up was the final straw.

The orchestrator of this entire debacle, Ross, finally dropped the hammer this morning. When it’s an owner giving the team’s statement in regards to the firing and not a general manager, that tells you about all you need to know about this hapless organization.

Thanks to that extension Ross gave him, Philbin can at least enjoy getting paid while he is not coaching for the remainder of the season.

What are my options? I can keep attempting to get Suh to live up to his contract, or I can take a permanent vacation and get paid anyway? Tough choice.