Here’s What You Need to Know About the Denver Broncos 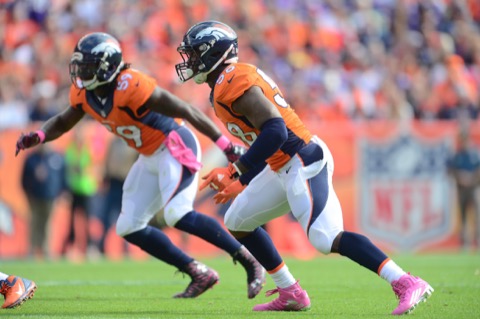 Both teams are 6-0 and coming off a bye week. They feature the No. 1 (Packers) and 2 (Broncos) ranked scoring defenses in the NFL (the Broncos are No. 1 overall, which is a yardage-based ranking). They also both feature future Hall of Fame quarterbacks.

And those are the broad strokes.

I wanted to drill down a little bit, so I brought in my boy Shaggy McKnight, a lifelong Denver Broncos fan who is now stuck in Oshkosh, Wisconsin. Thanks, wife!

Admittedly, I don’t know much about the Broncos defense, other than it is the No. 1 unit in the league and they have a couple name pass rushers in DeMarcus Ware and Von Miller. Explain to us what or who is making this defense what it is, this season.

The best move the Broncos made this offseason was the hiring of Wade Puddin’ Phillips as defensive coordinator. He has made some incredible moves in getting Ware and Miller free to go after the QB. Mind you, we haven’t played a guy like Aaron Rodgers yet. That creep is good at football and his ability to run and throw will come in quite handy. Plus, it will really show how our QB looks like an old man with a new hip bouncing off the floor. Our defense has studs at all levels, great pass rush, run stopping, super-fast linebackers and two shutdown corners (Aqib Talib and Chris Harris Jr.). We have played the Browns, Raiders, Ravens, Queens and Lions. That’s why this game is so critical. We get to see what a professional offense can do.

By the way, what in the hell is wrong with your offense? Hasn’t looked good and in charge in a while.

Our receivers can’t get open and there’s no consistency in the run game. Maybe the return of Davante Adams will help, maybe it won’t.

I think, if for nothing else than fantasy football purposes, we would all like to know what the fuck is going on with the Broncos running game. They cut Badger great Montee Ball. C.J. Anderson is trash this year. It looks like Ronnie Hillman is the only guy worth a shit. Is that accurate? What the hell is the problem here?

As far as fantasy, I’m a huge Broncos fan and I only have their D, which has been a points machine. Other than that, stay away until further notice. Maybe Emmanuel Sanders, but that is it. Our line has been terrible, someone please find Montee Ball and tell him its going to be okay. C.J. Anderson has murdered countless fantasy teams and Hillman teases worse that a virgin on prom night.

Speaking of problems — Peyton Manning. He’s garbage. I know you and I both agree on that, but here’s what I’ve been thinking about. Manning traditionally starts like a house on fire, then he tails off when the weather gets cold and the games start to really matter. Forget the short-term implications. Manning has been terrible this season and history tells us he’s only going to get worse as the year goes on. Are you worried?

This has been hard. Like watching your favorite uncle get drunk and pass out on the Christmas tree. Nobody wants to say anything, but we all know that this could ruin Christmas. Somehow he’s turned into Tim Tebow, but without all the cool running and athletic ability. He’s making terrible choices and telegraphing his throws, and then we have to listen to the announcers tap-dance around it and make it not seem so bad.

What has to happen for the Broncos to win on Sunday?

If both teams play well, the Packers should win because Rodgers is a fucking man, but if Denver can actually run the ball and Manning doesn’t throw three INTs, then there is a good chance for a Broncos’ win.

Give me a prediction.

So You’re Telling Me Clay Matthews is a Leader?