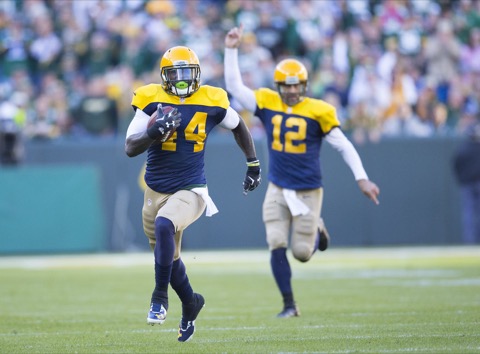 The Green Bay Packers defense got torched by Philip Rivers all day, but they came up huge on the one play they really needed to.

With the score 27-20, the San Diego Chargers waltzed right down the field to the Green Bay 3. On fourth down, with 20 seconds remaining, Rivers tried for Danny Woodhead in the end zone. Woodhead looked open, but rookie corner Damarious Randall closed quickly to knock the ball away.

In the process, Randall preserved the win and the Packers’ undefeated start.

They’ll head into the bye at 6-0, but not without plenty of questions.

Those questions start with the Packers defense, which went from looking dominant to looking awful in the span of week.

The Packers came into this one with a top 10 ranking against the pass, giving up 189 yards per game. Well, that’s totally down the shitter.

Rivers threw for 503 yards, going 43-of-65. Those are all Chargers’ single-game records.

Dan Fouts is not pleased.

San Diego didn’t even try to establish the run, rushing only 21 times for 60 yards on the day.

The Packers defense, meanwhile, just kept doing the same thing over and over again. Man-to-man coverage and blitz, blitz, blitz.

They did tally three sacks on the day, but that certainly wasn’t enough to deter the Chargers from throwing.

Rivers was able to get the ball out quickly and, unlike the Packers’ receivers, the Chargers actually have a couple guys who can get separation. We speak of Keenan Allen (14 for 157) and Antonio Gates (nine for 95). The only thing that stopped Allen was an injury that caused him to miss the fourth quarter.

The Packers had no answer for him.

Ironically, Rivers demonstrated the sort of pinpoint accuracy that Aaron Rodgers is known for. Often times, the coverage was decent, but Rivers just placed the ball in the perfect spot.

Fortunately for the Packers, the Chargers just couldn’t punch it into the end zone often enough.

Meanwhile, who the hell knows what was going on with the Packers’ offensive game plan.

Eddie Lacy must be in the doghouse because he wasn’t part of it. Lacy had just five total touches. Instead, the Packers running game was almost entirely James Starks, who carried 10 times for 112 yards.

Why is a guy averaging 11 yards per carry getting only 10 carries?

As usual, the Packers’ receivers couldn’t get open. The big plays in the passing game came courtesy of little-used Jeff Janis, who had receptions of 46 and 33.

Every other pass catcher looked like a bum, but somehow Rodgers still managed to turn in a decent stat line (16-of-29, 255 yards, two touchdowns, no picks). He did so by throwing to nine different receivers.

Not every win is going to be pretty and this one would certainly fall into that category.

The Packers faced an overmatched team and frankly, got outplayed by them. The Chargers’ inability to score touchdowns, especially early, killed them.

San Diego outgunned the Packers 548 to 370, converted 50 percent of their third downs to 33 percent for the Packers, and held a 16 minute advantage in time of possession. That’s domination.

Luckily for the Packers, it just didn’t translate to the scoreboard.