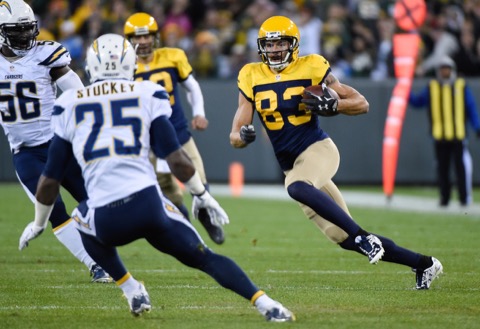 It’s hard to say if I’ve ever been more disappointed with a win, but that’s certainly the case with this game in this season. The Green Bay Packers found a way to beat the San Diego Chargers 27-20, but there wasn’t much to like.

Not defensively or offensively.

Defensively, the Packers vaunted pass defense got downright torched. To the tune of 503 yards. That’s fucking pathetic and these assholes should be embarrassed. Offensively, well, we already bitched about the game plan, so we’re not going to do it again.

Well, okay, I will say this. It appeared as if Tom Clements was just throwing some shit against the wall in hopes that some of it would stick. There didn’t seem to be any rhyme or reason to what was being called on Sunday. Hey, here’s something that works! Now that we know that, let’s not use it anymore!

Anyway, here are some of the things that stuck out that we didn’t get into on Sunday.

Jeff Janis has earned opportunities
The Packers have zero receivers who can get open on a regular basis right now and that includes Randall Cobb. These guys can’t get separation and Clements is rarely putting them in position to succeed. So, I’ve got a bunch of receivers who can’t beat their man… ah, fuck it! Let’s go deep anyway! They’re due! Right. Yeah. Jeff Janis may be the exception here. And even if he’s not, he deserves the opportunity after Sunday’s effort. He was the Packers’ leading receiver with two catches — yes, that tied him for most receptions by a Packer on Sunday — and 79 yards. The yardage total was 41 more yards than Randall Cobb, the Packers’ second-leading receiver on the day, put up. What was perhaps even more impressive was the block Janis had on James Starks’ 65-yard touchdown run. Starks wasn’t getting into the end zone without that block and Janis put his guy on the ground. Time to give this guy a real look.

Another week, another injury
This time it was receiver and returner Ty Montgomery. Montgomery left with what was said to be an ankle injury. Thankfully, it wasn’t a knee injury. However, we can’t really say anything other than that’s what you get. The Packers went out of their way not to play “injured” guys who probably could have played. One of those guys was receiver Davante Adams, who practiced all week. Had Adams been on the field, Montgomery would have gotten fewer offensive snaps and probably wouldn’t be hurt right now. On one hand Mike McCarthy says, if they’re healthy enough, they’re going to play. Then guys who appear healthy enough don’t play. Well, this is what you get.

Lacy vs. Starks
James Starks had 10 rushes for 112 yards and caught one pass for five, with two total touchdowns. Eddie Lacy had four rushes for three yards and two catches for 17. That’s 11 touches to six and that’s certainly not the traditional breakdown. We can only assume Lacy is in the doghouse for some reason or another. Early in the broadcast, the announcers mentioned that Mike McCarthy alluded to Starks having earned more playing time. And that’s fine, but Starks both started the game and dominated the running back touches. Obviously, no one saw that coming. It worked out just fine, except for the stupidity of the situation. The Packers ran just 17 designed rushing plays on Sunday. That’s four fewer than San Diego, who clearly had no intention of even giving a shit about the run. Meanwhile, you’re averaging 7.9 yards per rushing play. Not only was Lacy underutilized, but the running game as a whole was underutilized. We don’t really care about the breakdown of carries. Use whatever back you want, but exploit the advantage. The Packers had one with their running game and refused to use it. That might have helped with that 16-minute time of possession advantage the Chargers had. You’re a fucking dim bulb, Tom Clements.

Where was the pass rush?
The Packers came away with three sacks on the day, but when the opposing quarterback passes 65 times, that doesn’t look so impressive. The defense blitzed all goddam day and the result was consistent. A bunch of guys crash into the line and a bunch of guys get stood up. Part of it was Philip Rivers’ quick release and decision-making. Part of it was scheme. The Packers kept doing the same thing over and over and over again. It was like, well, it’s bound to work one of these times! It did work here and there in the second half, but the Packers pass rush should have dominated in this contest. They were facing a banged-up offensive line that wasn’t very good to begin with. That’s the most ineffective I’ve seen the Packers pass rush this season. Kudos to Mike McCoy and company for outcoaching Dom Capers. That’s really the only explanation we can give this failure.

Three little stats
We discussed how the Chargers dominated the game statistically, on Sunday. They obviously didn’t dominate on the scoreboard though. There are three telling areas where the Packers had an advantage. The Chargers accrued more penalties (nine to six) than the Packers, had one more turnover and were much worse in red zone efficiency. San Diego was just 2-of-6 in the red zone, while the Packers converted 50 percent of their drives. A play here, a play there and the Packers lose to an inferior opponent at home.

Lots to ponder, lots to fix over that bye week.

Big Mike Was Not Pleased With the Officiating

Big Mike Was Not Pleased With the Officiating