by Shawn
in Uncategorized
4 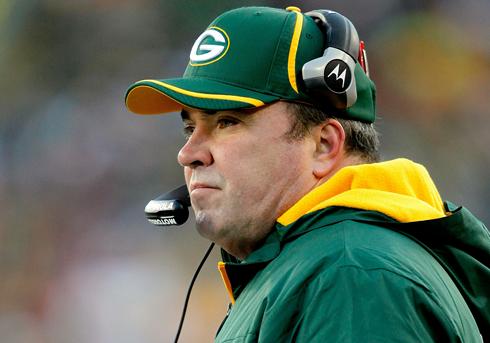 Something I didn’t realize in the immediate aftermath of the Packers’ victory over the San Diego Chargers last Sunday is that Mike McCarthy reached the 100 win plateau with that game.

Out of the current NFL head coaches with 100 wins, McCarthy reached the 100 wins the quickest, having done it in a very symmetrical 150 games. MM’s career record is 100-49-1. Curiously, the .668 win percentage is nearly identical to the only Packers’ coach to have won more games, Curly Lambeau, who went 209-104-21. And those career win percentages are nearly the same as Mike Holmgren’s, who went 75-37 for a .670.

When asked about it after the game, McCarthy very magnanimously said it was a reflection of the organization and that he was “blessed to be here.”

Datone Jones is coming on. When you’re a first round draft pick, you’re expected to be like Leonardo Dicaprio on Sundays and not like John C Reilly. After a couple years of Datone playing the invisible man, he has come on strong this season, especially in the last few games. His game against the Chargers was likely his best of the season.

Jones once again was able to pressure the quarterback and collect a sack when allowed to rush from the outside, instead of being inside where he regularly faces double-teams. Jones has shown a knack for getting pressure when allowed outside where he can work one-on-one against a tackle.

If Nick Perry misses any more time, having Jones replace Perry in the pass rush package could make a lot of sense. They both bring a lot of the same skills to the table.

Jones also made some huge plays in the run game, including the 3rd and goal that was the penultimate play in the game. That has been a weakness for Jones, and if he can continue to make plays there, he will surely get more snaps in every defensive package.

Eddie Lacy regressing? After a decent game against the 49ers, Eddie Lacy made a load of poor decisions and looked slow against the Rams before being a non-factor against the Chargers. Packer fans, of course, hope this is mostly due to injury as Lacy has a bum ankle, and as a big man with quick feet, that is probably the worst injury he could have.

Mike McCarthy also threw that out there as a possible excuse, though whether that was to cover Lacy or McCarthy, I don’t know.

Anyway, last week wasn’t the first time that James Starks looked like the better runner for the Packers. Packer fans hope the bye helps Lacy get healthier and recharged for the tough middle of the schedule.

Despite Starks perhaps being the better ball carrier for at least half the games this season, Lacy remains the better blocker and pass catcher. Due to that, he should easily remain the starting tailback unless he continues to be as ineffective carrying the football as he was against the Chargers.