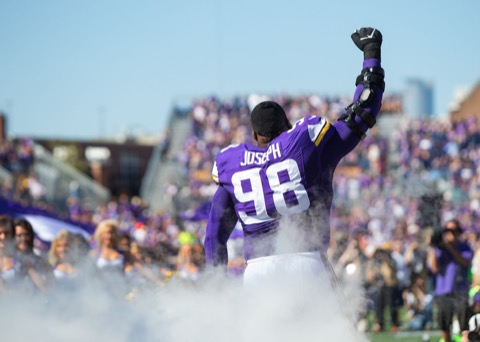 Ah, the Minnesota Vikings. Their special brand of stupidity will never be matched. Take defensive tackle Linval Joseph, for example.

Fits right in with this crew. Totally thinks the Vikings are going to the Super Bowl this year, just like Groucho.

“We just want to keep doing our job, so we can go to the Super Bowl,” Joseph told the Pioneer Press. “It’s very realistic. Right now, we’re playing good team ball and that’s how you get there. … Right now, we have the same talent or more talent now than I did when I was with the Giants in 2011.”

That’s how you get there!

Yes, the Queens singed Joseph as a free agent prior to the 2014 season. He previously played for the New York Giants and won a ring with them following the 2011 season.

So please, Linval, tell us more about how these Minnesota Vikings will win the Super Bowl.

“I see it,” Joseph said. “I have a good feeling. I see it, and right now we just got to stay together and just keep doing our job.”

“As the season goes on, defense wins games and offense wins championships, so it’s going to come on the offense when it comes down to the final round,” Joseph said. “So every week you want to get better as a team, and we are. We’re establishing the run, we’re passing the ball, we’re stopping the run and we’re getting turnovers. So one step at a time. So now we got to keep elevating our game.”

We’ve never heard that one, but it sounds completely sound.

And simple. So simple!

Surprised no one has thought of this before!

You’ll have to forgive Joseph. He’s somewhat new to Minnesota. Apparently, the Vikings’ culture of failure and losing hasn’t totally rubbed off on him just yet.

It will, though. That’s inevitable.