Aaron Rodgers Wasn’t Happy with the Play Calling Either 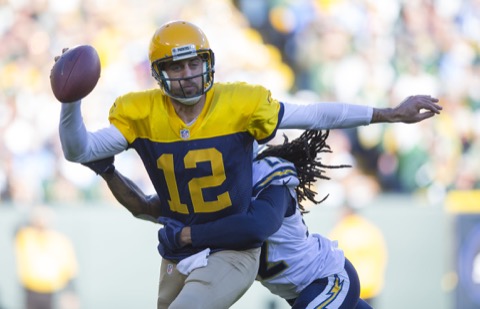 Rodgers didn’t specifically call Clements out, but he was clearly frustrated after the game.

“We had 49 [offensive] plays tonight; that’s far below our standard. They had the ball for 38 minutes,” Rodgers said.

“At this point, we don’t need to win pretty every week. We’d like to, and we’re going to get graded to that standard. You set the bar pretty high with the pretty wins. But when you have a game like tonight, 49 plays, the inefficiency in the passing game, it’s not going to be the best meeting room coming back next Monday. But they all count the same. We’ll take ‘em all.”

Like us, Rodgers also pointed out Eddie Lacy’s lack of involvement. That’s on the play caller.

The Packers called only 17 designed runs on Sunday, four less than the pass-happy Chargers. And clearly, that would have helped with that time of possession disparity.

Rodgers also noted how badly the Packers need Davante Adams back. That’s the second time he’s mentioned Adams’ importance. The receiver has been sidelined for three weeks with an ankle injury. Adams practiced all week leading up to the San Diego game and the coaching staff still decided to keep him on the shelf.

That comment by Rodgers is a clear message to his receivers, though.

“You’re not getting open enough.”

No one on the Packers had more than two receptions on Sunday.

Rodgers could be seen pacing the sidelines on Sunday.

The combination of the poor play calling, the subpar play at receiver and a defense that couldn’t get the hell of the field made it a brutal game to watch. We understand his frustration.

Previous Article
Big Mike Was Not Pleased With the Officiating
Next Article
Report: Ty Montgomery Injury Not Serious