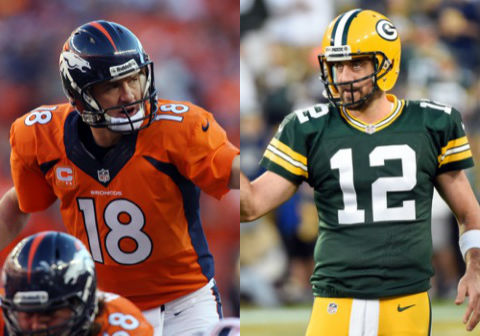 Quarterbacks get asked about other quarterbacks all the time. That usually produces some sort of cliche-ridden response about how the other guy is playing really well and I really respect his game.

Naturally, Green Bay Packers quarterback Aaron Rodgers was asked about his Denver Broncos counterpart, Peyton Manning, this week. His response deviated a bit from the norm, at least as far as these things go.

“Got to know him a little bit at some events, he’s a very funny guy,” Rodgers said. “Fun to be around. He’s always cracking jokes and got a great personality. I love his commercials. He’s been doing it at the highest level for a long time, so you’ve got to have a ton of respect, and I do. I appreciate the contributions he’s made to the game. Both on and off the field. He’s a legend.”

You’d think that if Manning whipped out his dong, Rodgers would jump at the chance to slurp it up. That’s how much he loves old Fivehead.