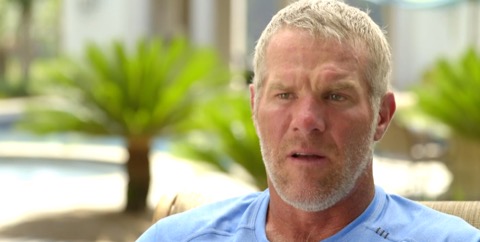 Want to waste a little bit of your Friday afternoon? Of course you do!

In it, Favre talks about when he knew his career was over, if he thinks he could still play (yes), Peyton Manning falling apart, and coming back to the Green Bay family.

The video was shot before Favre returned for his Green Bay Packers Hall of Fame induction, which he also addresses.

Here’s what he had to say about getting back in Packers fans good graces.

“The whole saying ‘time heals everything’ is certainly true. If you had been there when I came out of the tunnel as a Viking playing in Lambeau for the first time, you would’ve thought, ‘We won’t be around when time heals this.’ There was some Hatfields and McCoys type (stuff). I mean, there was some hate that day. Part of me — not liked it, but I was honored.

“When my career was over, I was like, ‘Well, now what?’ At some point, I want people in Green Bay to love me again. That’s the way it’s supposed to be, in spite of what happened, how things unfolded. And I was worried for a while. So, I didn’t think about calling and saying, ‘Look, maybe think about putting me in the Hall of Fame or retire my jersey or something.’ No. But I was honored when they called me.

“I’m not just saying this because I played there. There is no better place to model how it’s supposed to work than Green Bay. It’s just special. It really is.”