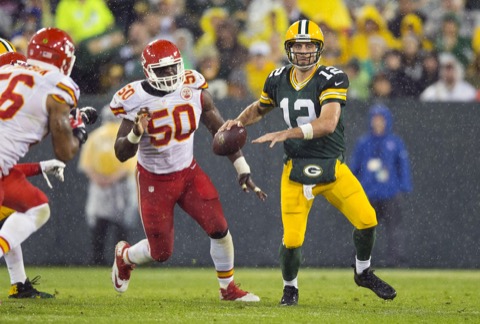 Green Bay Packers backup quarterback Scott Tolzien is from Chicago. He grew up watching those dominant 1990s-era Chicago Bulls teams led by Michael Jordan, the greatest basketball player to put on a pair of sneakers.

And when Scooter was asked about Aaron Rodgers’ performance after Monday night’s win over Kansas City, he pulled his Jordan card.

“I mean, to me,” Tolzien said, “it’s like watching Jordan in his prime. He’s at the top of his game. He makes it all go.”

No doubt Rodgers has been masterful of late.

He had a couple clunkers during the 2014 season, but still handily won his second NFL MVP.

So far this year, Rodgers has been something else, though.

The usual gaudy stats are there — 67-of-91, 771 yards, 10 touchdowns, no interceptions. It’s three games, but thus far, Rodgers has a 73.6 completion percentage. His career high as a starter is 68.3 and that was set in 2011, his first MVP season. Rodgers currently leads the league in touchdown passes, touchdown percentage, quarterback rating, QBR and adjusted yards gained per pass attempt.

Then there are the intangibles.

Rodgers has developed an uncanny ability for both getting opponents to jump offsides and catching them with 12 men on the field and taking advantage.

So maybe the comparison is warranted. At least in that vein.

There’s one where it’s not.

You know what that is.

We need some more of those, buddy!