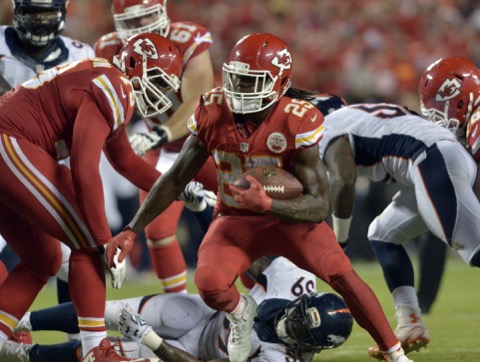 Shawn (2-0): The Green Bay Packers get more of the same on Monday night.

By more of the same, I mean they face a team that likes to run the football and play defense. Like Seattle, the Kansas City Chiefs defense has dynamic pass rushers on both ends of the line who will look to dominate David Bakhtiari and Don Barclay even more than they were last week. In fact, the Chiefs will line up Justin Houston, he of 20 sacks last season, across from Barclay and in doing so, they will have the most lopsided matchup of any for either team.

Bakhtiari struggles more with the bull rush and he gets the more physical Tamba Hali. Barclay struggles more with the speed rush and he faces the best speed rush in the league in Houston. Ouch. This is definitely conundrum No. 1 for a Packers offense that is used to being pretty dominant at home. Whether the Packers look to run the ball more, go with short passes or help their tackles out, containing Houston and Hali will be the first order of business.

On the other side of the ball, the Chiefs have a running back who is probably the most explosive back in the game when healthy, which is rare. The Chiefs prefer to run the football and allow their mediocre quarterback, Alex Smith, to be a game manager. When the Chiefs can’t run the football and need Smith to consistently make plays, they typically get beat.

So, that’s it. That’s KC’s shot. They need to wreak havoc with their OLBs to stymie the Packers offense while Jamaal Charles has a big night on the ground. If they can do those two things, they can pull the upset on Monday night.

The Chiefs may have some reasons to be more confident than most when heading into Lambeau Field. They have never lost there, being 3-0 and the only NFL team to be undefeated at Lambeau and have played there more than once. Yeah, Len Dawson and Trent Green should be pumped about that, but that just tells me that the Chiefs are due for a butt whipping.

The main two obstacles to the Chiefs pulling this off, besides the fact the Packers are the better team, have to do with the Chiefs’ pass defense and the Packers’ run defense. I don’t see Jamaal Charles having a big game on Monday night. B.J. Raji, Mike Pennel and Mike Daniels seem to just be getting better in the middle. Except for the read-option, which the Chiefs don’t run, the Packers played very well against the run versus Seattle. I expect that to continue.

Smith has one target that concerns me in Travis Kelce, but I don’t think he can do enough to sustain the Chiefs offense.

Lastly, the Chiefs have a great front seven, which includes their D-line and inside linebacker Derrick Johnson. However, their pass defense features a great rookie in Marcus Peters and not much else. As good as the Chiefs defense looked at times against the Broncos last week, when the Broncos decided to ditch the run, spread the field and just throw the ball before half and at the end of the game, the Chiefs defense looked as soft as the Colts. The Broncos with limp-armed Peyton Manning marched right down the field.

I don’t think the Packers and Aaron Rodgers didn’t notice. Expect the Packers to run a lot of hurry up and go after that defensive backfield relentlessly. The Chiefs have to have at least some early success on defense to keep this game close. The Packers are the fastest starting team in the league, and the Chiefs are NOT built to come from behind.

Just like every other home game, I expect the Packers offense to find its footing and I expect the opponent to ultimately not be able to keep up.

Andrew (1-1): Well here we are again against the Kansas City Chiefs, this time at home, but nonetheless as prohibitive favorites.

There’s been a lot of chatter this past week about how the Packers potential perfect season in 2011 was spoiled by KC, but I’ve heard almost nothing of the fact that it was a classic boneheaded Mike McCarthy train wreck as he refused to run the ball against a defense known to be soft against it, while continually throwing into one of the best pass defenses in football.

What does this have to do with now? Nothing. Just venting.

But the script appears to have flipped for the Kansas City Chiefs, as early indications show that defending the pass is now its kryptonite. In my opinion, this will be the game where we see if Tom Clements is really the offensive coordinator calling the plays or if he’s just Mike McCarthy’s puppet. All indications are the Packers should throw the ball all night, but if they have some target number for how many running plays they’re supposed to hit in the second half regardless if it is completely ineffective or not, then we’ll know the answer to that question and whether or not this game will stay close.

I’ve been screaming for the four wide receiver set as the main staple of the offense for some time now, but will the Packers really only utilize it when the game is close? Will the Packers allow the Chiefs to stay in the game before putting Randall Cobb or Ty Montgomery in the backfield? It works every time, yet the Packers only use it late in games when they’re behind. McCarthy did the same thing last year several times and if Clements refuses to use this formation earlier and with more frequency, then it has to be because Big Mac is still pulling the strings.

Tom Brady and the Patriots faced a tough pass rush at Buffalo last week and what did they do? They spread the field and threw the ball quick all day long. Tom Brady finished 38 of 59 for 466 yards and 3 TDs. Are the Packers and Tom Clements aggressive enough to challenge the Chiefs main weakness so directly and repeatedly? I honestly don’t know. Have we ever seen it?

Aaron Rodgers has never thrown 50 passes in a game and has only thrown for over 400 yards three times in his career. This game has 50 passes and 500 yards written all over it if the Packers decide to go out there and get it.

The Chiefs, in essence, are coming off a bye week after suffering an extremely tough loss to the Broncos on Thursday night. I’m a firm believer in the idea that a team coming off a loss like that will tend to practice better the following week. Also, the Kansas City staff is loaded with former Packers personnel and coaches. Andy Reid and company know a good deal about how the Packers operate, and if we fail to fear the menacing presence of former Packers Frank Zombo and Dezman Moses, well let’s just say it could be one long night indeed.

Earlier in the week, I felt pretty concerned about this game and think there is still reason to be apprehensive, but according to Bob McGinn the Packers are 18-1 when favored by a touchdown or more. That’s all fine and good, but the line is now 6.5 in most places.

I feel like the Chiefs are going to get out fast and catch the Packers by surprise. But I will also say the Packers will eventually get to the packages and formations proven to work every time that they continually eliminate from their arsenal in the early parts of games. As things get desperate and the Packers struggle to keep the offense on the field, they’ll turn to those plays and packages they’ve ignored all game long in order to pull out a dramatic fourth quarter comeback for the win.

The Packers are coming off a big, emotional win. Their opponent is both intimately familiar with them and is well-rested.

Perfect recipe for a letdown.

While that may be the case, I also just can’t see a way that it happens. The Packers are just more talented than the Chiefs and assuming Buffoon, Mike McCarthy’s alter ego, doesn’t make an appearance, the Packers will win this game.

The Chiefs’ game plan will be much like the Bears’ was against the Packers in week 1. Control the clock by running the ball, don’t ask your quarterback to do too much and play defense. The Chiefs are actually much better equipped to execute than game plan than the Bears, too.

They have a better running back in Jamaal Charles, a better, less turnover-prone quarterback in Alex Smith and a better defense, led by the pass rushing combo of Houston and Hali. But like the Bears, they don’t have a very good secondary and that’s where the Packers have a gigantic advantage.

Aaron Rodgers vs. any secondary is advantage Packers, but especially in this case.

The Packers will need to move quickly on offense. They SHOULD utilize their short passing game to protect their tackles and negate the KC rush. There is, of course, no guarantee they WILL do that.

They’ll find a way, though.