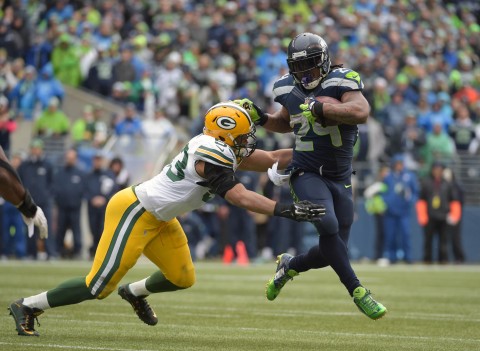 Shawn  (1-0) — This might be a rematch of last year’s NFC Championship game and the two teams overwhelmingly picked to represent the NFC in the Super Bowl this year, but frankly, both of the Green Bay Packers and Seattle Seahawks are a shadow of last season’s version of themselves, right now.

Seattle has been playing their own version of musical chairs along their offensive line, with Max Unger and James Carpenter gone. No one is happier about that development than Mike Daniels, who got bitched by Carpenter in Seattle in week 1 last season. The Seahawks still have Marshawn Lynch and Russell Wilson, but the play of both is directly affected by the performance of the offensive line. The Packers did well to have Wilson on the run in their last meeting and that was against a stronger O-line than they’ll be facing on Sunday night.

Lynch himself might be a bad matchup for a defense that struggles to tackle, but if his line can’t open holes for him, he might not be as big a threat as you’d think.

On defense, the Seahawks are in even worse shape due to missing three players out of last season’s defensive backfield, including starters Walter Thurmond and the beast Kam Chancellor. The Seahawks have also been missing their nickel back Jeremy Lane and without him, they have at times taken the severe step of having Richard Sherman cover the slot. With the Packers’ best receiver, Randall Cobb, lining up in the slot, we will see whether Sherman gets the call and if so, who covers Davante Adams. Adams could end up being a key player for the Packers.

All that being said, it is a real toss up regarding which team is in worse shape right now. The Packers are not only missing their best receiver in Jordy Nelson, but their next best receiver in Cobb is playing injured. The Packers are also missing right tackle Bryan Bulaga, which is an especially painful blow with the Seahawks coming to town. The Seahawks are one of the few teams with a pass rusher coming off the right side who is capable of both the speed and bull rush. The Packers have typically handled Cliff Avril, even going back to his days in Detroit, but a matchup against Don Barclay might reverse his fortunes.

On defense, the Packers are missing two of the guys who Mike Daniels credited for turning the defense around in the second half last season — Letroy Guion and Sam Barrington. There isn’t necessarily a huge drop off between Barrington and Nate Palmer, but Barrington was the more physical player, which again makes a particular difference this week. The Packers did not bring the physicality they needed to on defense last week. Losing Sam Barrington is not going to make that hurdle any easier to clear.

However, I don’t think either of those factors are more urgent than the fact that the Seahawks are 0-1 and the Packers are 1-0. The Seahawks are in an awfully good division to be starting the year 0-2. Oh, they have the confidence that they could come back from that, but still, not falling to 0-2 is a strong motivator.

However, I am going to pick the Packers for two reasons. It is in Green Bay, which has the double effect of the Packers usually playing better while the Seahawks are clearly not as good on the road. And secondly, I love what I saw out of Aaron Rodgers last week. He made great decisions and was incredibly accurate with the football. Despite the Packers’ issues at receiver, I think Rodgers can finally have a good game against the Seahawks.

Tough game, but I am going with Rodgers at Lambeau. 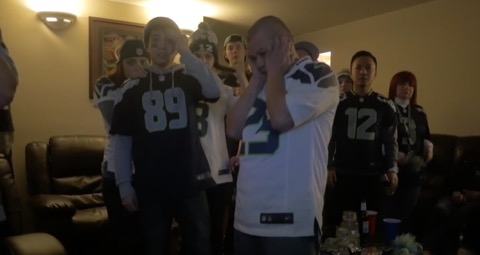 Andrew (1-0) — Damn, Shawn. In my opinion that might be the finest prediction you’ve written to date.

Not only that, I was prepared to pick Seattle to win, so your positive attitude about all of this has muddied the prediction waters I currently find myself doing the back float in. Did the Bob McGinn scouting report on Seattle get to you and fill you with optimism? Because personally I am still terrified of this Seahawks team.

I just can’t envision the Packers slowing down the Seattle offense, despite the fact that their offensive line is in complete shambles. Who’s going to be a dominant force to disrupt the running game either on the defensive line or in the middle of the field? It’s almost going to have to be Clay Matthews and Mike Daniels, but it sure would be nice if someone else steps up. Will those two guys playing out of their minds make up for the deficiencies the Packers clearly have in defending the running game and tackling?

Who’s going to stop Jimmy Graham? This one baffles me. I have no clue. If the Packers think they’re going to trot Sean Richardson out there against him then old Jimmy just might be sitting on a career game.

The Packers’ pass rush is not that of the St. Louis Rams. I don’t care who is playing offensive line. The Packers defense is not capable of sacking a quarterback like Russell Wilson a half dozen times or more. And after being harassed like he was all day in week 1, Seattle still put up 30+ points, although they did have a defensive and special teams TD.

With their offensive production on the road against a far superior defense in St. Louis when they were clearly not firing on all cylinders, I have a difficult time believing that Seattle won’t put up at least 30 on Green Bay’s impotent-looking bunch.

The over is the play here folks. The game itself could go either way, but I just don’t see the Packers exorcising their demons just yet. I still don’t believe they’re the better team and they are certainly not the tougher more physical team.

Whoever loses this game is in real danger of taking a momentous step backwards as far as team psyche. If the Packers can send the Seahawks to 0-2, would the finger-pointing begin and the dissension in the ranks take over in the Pacific Northwest? It very well could.

But the flip side of that coin here is it very well could be the Packers who have to look themselves in the mirror should they fall at home, which I believe they will.

Here’s to me being wrong. Go Pack Go! 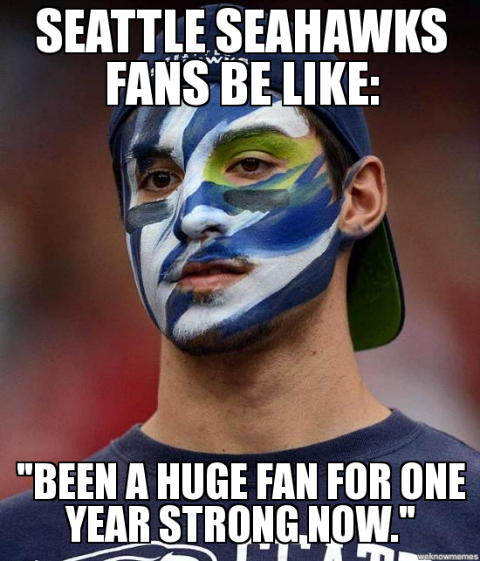 Monty (1-0) — There are a lot of factors to consider here and we’re going to get to those momentarily, but first of all, I’d like to say this.

Fuck the Seattle Seahawks and fuck their shitty fans. I thought no one could rival Minnesota Vikings fans in terms of ignorance and bluster — because you know, talking loudly totally makes up for the fact that you don’t have anything intelligent to say — but these assclowns are starting to get real close.

We all know what’s on the line here. The Packers desperately want to change the narrative and get the SeaMonkey off their back. The SeaMonkeys don’t want to start 0-2.

And there’s really no way to say how those intangible factors are going to play into this game, so let’s look at the tangible ones, i.e. what’s different from last season, when the Packers lost twice to the Seahags.

1. Seattle’s offensive line has gone from strength to weakness. They’ve lost two of their top linemen — James Carpenter via free agency and Max Unger via trade. Drew Nowak has replaced Unger at center and Justin Britt has moved from right tackle to replace Carpenter at left guard. That has brought in Garry Gilliam at right tackle. Unger was a two-time Pro Bowler. Nowak is a former undrafted free agent who spent 2014 on Seattle’s practice squad. Carpenter was a former first-round pick who started 38 games for Seattle. Gilliam was an undrafted free agent signed by the Seahawks in 2014. You’ll remember Gilliam as the guy who caught Jon Ryan’s touchdown pass in the NFC Championship game. Despite that highlight, both Gilliam and Nowak are obviously huge downgrades for Seattle’s offensive line.

2. Part of the reason the Seattle offensive line was downgraded is because of tight end Jimmy Graham. The Shithawks included Unger in the package they sent to New Orleans to acquire Graham, which is a huge upgrade for the Seattle offense. Graham had 85 catches for 889 yards and 10 touchdowns in 2014 with the Saints. Seattle hasn’t had that type of production at tight end since Pete Carroll has been their coach. Historically, the Packers have had a tough time covering big, fast, athletic tight ends like Graham. That said, they faced him last year and held him to five catches for 59 yards and a touchdown. Against Jimmy Graham, we would call that a success or at least a draw. The guy is a weapon though and the Packers will have to be mindful of him.

3. The Seattle secondary isn’t anything close to what it was. This has been the strength of the team in recent seasons. So much so, that they’ve given themselves a stupid nickname. Well, it’s currently a shell of its former self. Byron Maxwell and Walter Thurmond have left via free agency. Jeremy Lane is on injured reserve. Kam Chancellor is holding out. That leaves Richard Sherman and Earl Thomas, both of whom are excellent players, and two guys who are crap. Those two guys are Cary Williams and Dion Bailey. Williams was released by the Eagles this offseason and if you’re getting released by the Eagles, you’re a pretty piss poor cornerback. Ironically, Philly is the team that signed Maxwell, so the Seachickens basically took a net loss to the Eagles on that one. Bailey was a 2014 undrafted free agent signing. So, Legion of Boom? How about Legion of Go Fuck Yourself?

4. It wouldn’t be football season if members of the Green Bay Packers weren’t dropping like flies. Jordy Nelson, gone. Sam Barrington, gone. Bryan Bulaga, out this week. Randall Cobb, playing at less than 100 percent. Letroy Guion, suspended. That’s a lot to overcome right there, but let’s break it down because it’s not as bad as it looks. We’ll still take the receiving corps of Cobb, Davante Adams and James Jones over that half-whole Seattle secondary. Don Barclay, who has 18 career starts, will be filling in at right tackle for Bulaga. It’s not as if the Packers are sending Allen Barbre out there to be eaten alive. The biggest concern is how Nate Palmer will fill in for Barrington at inside linebacker. We expect a drop off, but not a huge one. The biggest loss, in our eyes, is the absence of Guion. Mike Pennel and, to a greater extent, Mike Daniels need to step it up this week.

5. See what I’ve done here? I’ve saved the best for last. His name is Aaron Rodgers. You’ll probably recall that the league MVP was out there playing on one leg the last time he faced the Seafucks. And he played like garbage — 19-of-34, 178 yards, one TD and two picks. You can say what you want about why the Packers lost the NFC Championship game, but the real reason they lost it is because their best player had his worst game of the season. We’re betting that won’t happen this time, mostly because Rodgers is healthy and mobile. THAT is the biggest difference here for either team.

Seattle is going to put up some points. The Packers defense just isn’t that good, again. They do have a number of clear advantages, however.