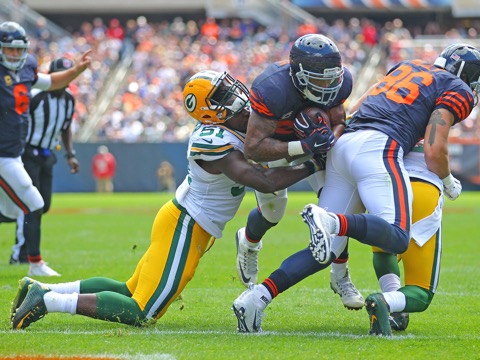 You can go ahead and file this under Ringing Endorsements. Green Bay Packers outside linebacker Julius Peppers was asked how he thinks inside linebackers Nate Palmer and Jake Ryan are doing filling in for Sam Barrington, who was lost for the season in week 1.

Doesn’t really inspire a lot of confidence, does it?

Unfortunately, the Packers don’t have a choice.

They only have three inside linebackers on their roster — Clay Matthews, Palmer and Ryan.

Palmer will get the start against Seattle and Ryan, a rookie, should see some snaps on defense as well.

Ultimately, Ryan likely has the higher upside, but probably lacks the experience to be an immediate factor.

The Packers aren’t really an organization that lives with rookie mistakes.

We’ll see, though. Hopefully, one of these guys proves to be slightly more than adequate.