Packers vs. Saints: What to Watch 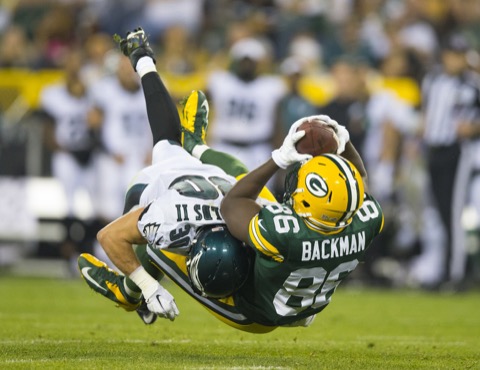 Well, this should be a real treat. The Green Bay Packers will take on the New Orleans Saints this evening in the final preseason game of what feels like the longest preseason ever.

Traditionally, the starters play a series and then exit stage left in the fourth preseason game. We would be mildly surprised if it plays out that way tonight, though. In fact, we’d probably be disappointed if it isn’t all or mostly backups right from the start of the game.

So, while this game is likely to be a snoozer, there are still some things worth keeping an eye on. Here they are.

The Return of Jared Abbrederis
The Packers will finally get a look at second-year receiver and Badger great Jared Abbrederis in a game. This guy missed all of last season with a torn ACL. He showed up at camp this year and promptly suffered a concussion during the first practice. That kept him sidelined until this week. So, now the Packers can get a glimpse of what Abbrederis can actually do in a game before they release him on Friday. Yeah, sorry to say, but Jerry Abbaderry has no shot of making the final roster. That is, unless the Packers find a way to keep six receivers and we just don’t see that happening. Abbrederis is destined for the practice squad or another team. Hopefully the former.

The All-Important Third Tight End Spot
This could literally be the only roster spot that isn’t settled yet. It’s likely going to come down to Justin Perillo, who turned some heads in the first preseason game, and sixth-round pick Kennard Backman, who turned some heads in last week’s game. Who wants it? Perillo is the better blocker. Backman is the better receiver. Perillo spent time on the roster last season, but Backman was just drafted this year. We all know Ted has a hard time parting with guys he drafted. We’ll see what happens, but the man who shows better in tonight’s game should get the spot.

Clean Up on Aisle Special Teams
Ron Zook’s unit looked like total shit a week ago. Couldn’t cover kicks, too many penalties and that ginger fuck Tim Masthay couldn’t punt his way out of a paper bag. We’re not overly concerned, since a lot of the guys running around on that unit won’t be on the team next week, but we would like to see some sort of improvement. Fewer penalties and better kick coverage would be a start. Unfortunately, it looks like we’re stuck with Masthay.