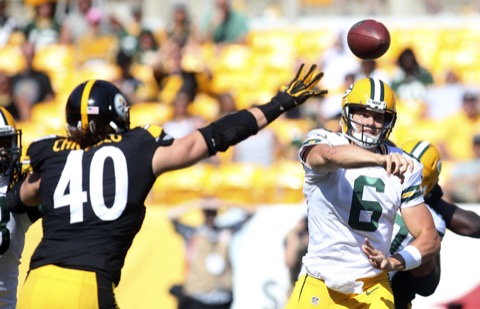 After cutting five players on Monday, the Green Bay Packers released seven more on Tuesday and placed receiver Jordy Nelson on injured reserve to get to the 75-man roster limit.

The Nelson move officially ends the receiver’s season and had been expected since news that he tore his ACL surfaced.

Hunt, Butler, Blue and Spears were originally signed as undrafted free agents this season. Hubbard was an undrafted free agent in 2014 and spent all of his rookie season on injured reserve. Blanchard and Sebetic were signed earlier this offseason. Each previously had brief practice squad stops with other teams.

No huge surprises here, but we do find it interesting that the Packers released both Blanchard and Hubbard before final cuts.

Blanchard obviously wasn’t going to make the roster ahead of Scott Tolzien or Brett Hundley, but coach Mike McCarthy has raved about him and publicly wondered why he wasn’t on an NFL roster. It’s possible the Packers bring him back on the practice squad if he isn’t signed by another team first.

Hubbard on the other hand, is one of those guys you hear about during the offseason, presumably because beat writers are trying to justify their salaries. The guy played at Alabama, where he was known as an underachiever. It was suggested he had a chance to make the roster as a pass rusher because of his physical tools.

And maybe another team has a shot for him, but the Packers look like they have plenty of bodies at outside linebacker. Guys like Andy Mulumba and Jayrone Elliott continue to improve. Those guys will go with lackluster holdovers Nick Perry and Mike Neal.

No room for Hubbard there.