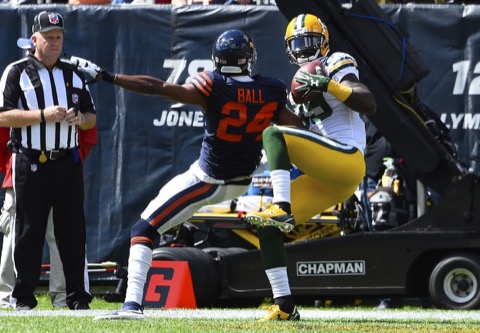 You’d have a hard time saying this one was pretty. In a game in which most everyone thought the Green Bay Packers would throttle the Chicago Bears, the Packers just managed to pull away late for a 31-23 win in Chicago.

The story behind what many will say was a lackluster effort was the Packers defense, which, as we predicted, was not in midseason form.

That defense let Bears running back Matt Forte do pretty much whatever he wanted and you’ve probably heard that story before. Well, nothing has changed.

Forte ran for 141 yards and a touchdown, 110 of which came in the first half.

The Packers offense took over in the second half, when they outscored the Bears 21-10.

We’d like to point to one or two guys who did the damage, but it really was a balanced effort.

Aaron Rodgers was 18-of-23 for 189 yards, three touchdowns and no picks. Not spectacular, but damn efficient.

Two of those touchdowns went to James Jones, who caught four for 51. The other touchdown went to Randall Cobb, who had five for 38.

Davante Adams led the team in receiving with four for 59. Meanwhile, Eddie Lacy had himself a workmanlike 19 for 85 yards and a touchdown.

For the Packers defense, it really seemed like the same old B.S.

They were able to get pressure on Jay Cutler — including 1.5 sacks by Julius Peppers and five total QB hits. Clay Matthews essentially closed out the game by intercepting Cutty! late in the fourth quarter.

And that’s all great, but the Packers didn’t even bother to paint the illusion that they had a top-tier defense.

We’re sure there will be talk of pad level very, very soon.

And we can’t wait for that.

In the meantime, we’ll take the win.

Not as dominant as we wanted it to be, but we’re going to chalk that up to this being a work in progress.