Packers, Hundley Pull Away From Saints to Close Preseason 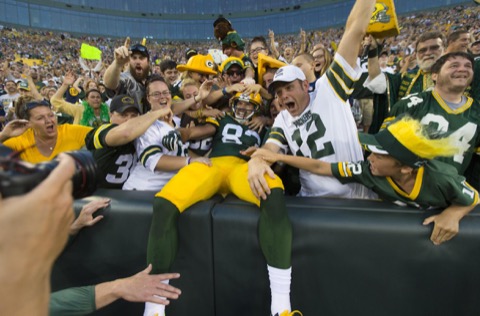 In the end, it was a 38-10 victory for the Green Bay Packers over the New Orleans Saints. In the end, we’re glad the preseason is finally over.

The Packers pulled away from the Saints in the second half behind the once-again very solid quarterback play of rookie Brett Hundley. This guy is going to be the No. 3 QB in 2015, but he certainly looks like he has a bright future.

If not a very solid backup in Green Bay, Hundley may well be a starter somewhere.

But let’s go over the game for a moment.

Very few starters played for the Packers in this one. The only offensive starter on the field was fullback John Kuhn. The only defensive starters were defensive end Mike Daniels, the soon-to-be-suspension-serving Letroy Guion and whomever is starting at outside linebacker between Nick Perry and Mike Neal.

The Packers second-team, first-team offense did nothing and neither did that pseudo first-team defense.

Much like last week, the opposing starting quarterback left the game perfect. This time that guy was Luke McCown, who was 5-of-5 for 82 yards and touchdown in his brief appearance.

While that was uninspiring, we did take note of who was on the field for the defense.

The starting cornerbacks were rookies Damarious Randall and LaDarius Gunter, which would suggest those two guys are ahead of fellow rookie Quinten Rollins at this point. Equally as interesting was that Carl Bradford and Nate Palmer got the starts at inside linebacker ahead of rookie Jake Ryan.

Bradford better hope that means he has a roster spot.

Anyway, we’re really just here to discuss who stood out. So here’s that.

QB Brett Hundley — Really beginning to like this kid. In fact, we can’t remember when a backup quarterback, especially a rookie, moved the ball as well as Hundley has in the past two games. He’s poised, knows when to use his legs, doesn’t make stupid decisions and has a surprisingly good command of the offense. Against the Saints, Hundley was 16-of-23 for 236 yards, four touchdowns and no picks.

WR Jeff Janis — Alright, we’re warming up to Janis. We’ve been riding him, saying all he can do is run a fly pattern. Well, he’s clearly improved the rest of his game. You can see the results on the field over the past two weeks. Janis is learning to work underneath. His 14-yard touchdown in the second quarter came on a slant. Now we just need to hope he can do this stuff against a first-team defense.

DT Bruce Gaston — If we haven’t said so already, we’re giving this guy a roster spot. Every time we look, there’s Gaston breaking through the line, getting a shot on the quarterback. He had two more quarterback hits on Thursday. Who knows what role this guy will have in the regular season, but he’s definitely earned an opportunity.

WR Larry Pinkard — We liked this guy since the Packers signed him as an undrafted free agent. Pinkard got thrown off the Old Dominion team his senior season. He had a 1,000-yard season as a junior, so clearly there was some talent here. He showed that Thursday night, turning a slant into a 77-yard touchdown reception. Now, Pinkard has no shot of making the roster. The wide receiver position is just too crowded. We certainly hope he’s brought back on the practice squad, though.

ILB Joe Thomas — This guy hung around on the practice squad last year after being an undrafted free agent. He certainly has limitations, but you can see his improvement from last year to this. Does that mean he’s making the roster? Probably not, but you could certainly make the argument that Thomas has played better than, say, Carl Bradford. Possibly, Jake Ryan. On Thursday he had four tackles, a sack and a QB hit.

OLB Jayrone Elliott — Give my boy some PT in the regular season, Big Mike! Elliott was a pass rushing phenom last preseason. This preseason you can see he’s developed an all-around game. The guy is just out there making plays. Five tackles, a pass defended and a QB hit on Thursday night. Elliott needs to get on the field for the defense this season.

RB Rajion Neal — Way to solidify your role as the Packers’ No. 3 running back, buddy! Five carries, 20 yards. Four receptions, 20 yards. If Eddie Lacy or James Starks were to get hurt in the regular season, we think Rajion Neal could come in and the offense wouldn’t miss a beat. We’re not suggesting he’s Easy Eddie Lacy, but Neal is an NFL running back.

RB John Crockett — Speaking of NFL running backs, it certainly seems John Crockett is one too. He’s not going to stick on the Packers roster this season, but the undrafted free agent did nothing to hurt himself against New Orleans. Eight carries for 42 yards and a touchdown and four receptions for 49. This guy can play in the league. We’re hoping no other teams realize that and the Packers are able to get him through to the practice squad.

S Chris Banjo — We’re not really sure if Banjo is/was on or off the final roster. The Packers have a lot of defensive backs, after all. If there was a question, then Banjo made it really hard for him to be off with his play Thursday evening. Banjo had five tackles, two passes defended and a pick. Lines don’t get much better than that for defensive backs.

S Jean Fanor — We’d be remiss if we didn’t mention Fanor. He’s not making the roster, but he went out and left it on the field Thursday night. Fanor led the Packers with seven tackles and one of those was for a loss. Might well be a guy worth keeping around on the practice squad.

Now, let’s get on with real football!