Of Course Pete Carroll Has Some More Complaints 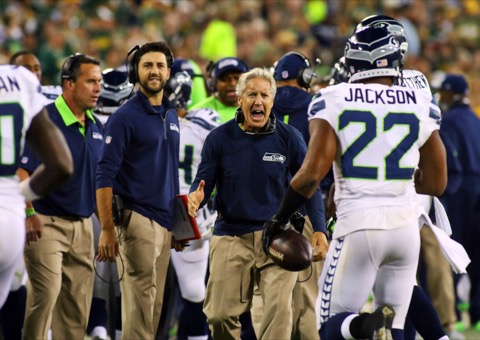 Pete Carroll, you are a fucking bag of shit.

After Pete’s Seattle Seahawks lost to the Green Bay Packers on Sunday, the coach had a bone to pick with the officials. He didn’t like the fact that the Packers were awarded the ball after Jayrone Elliott intercepted it and then fumbled. One of his guys came out of the pile with it, but the play was obviously ruled over and possession established before that.

But Pete Carroll is a whiny fuck.

A whiny fuck who refuses to pay any mind to the fact that his shitty team benefited from the most egregious officiating gaffe in history.

And so, let’s see. Might as well blame the officials for Sunday’s loss some more, right?

“Remember when they got us to jump offsides and then they get the 53-yard pass interference penalty?” Carroll said during his weekly appearance on ESPN 710 Seattle. “That’s a total mistake on the officials’ part. We jump offsides, their offensive line, the right guard and tackle stand up, the play’s dead. That play never happened. It never should have happened. It would have been a 5-yard penalty. It would have been second-and-12 backed up with 30 seconds left. That was a huge deal to us. It never should have gotten to that point. … That was the biggest play of the game for them, really.”

There was more, of course.

Carroll also took issue with all-around pile of shit K.J. Wright getting ejected. Wright tangled with Packers tight end Richard Rodgers, jamming his hand in Rodgers’ facemask. That resulted in a bit of a scuffle and, for a change, the instigator actually got tossed instead of the retaliator.

Not acceptable to Pete.

“K.J. didn’t swing back or nothing, so I don’t know,” he said. “I don’t know what to tell you on that one. I can see if they could have called it both ways, but for him to get thrown out when the other guy threw the punch, I don’t know.”

We don’t know either, you fucktard.

I mean, look. Maybe if you had gotten beat on a last-minute hail Mary that was called a touchdown when your guy clearly intercepted the ball, then maybe it might be okay for you to complain.

But that didn’t happen.

You lost by 10 points. You got outplayed.

So go fuck yourself.

Just a Shirt with Jay Cutler Blowing His Brains Out…

Just a Shirt with Jay Cutler Blowing His Brains Out...