Nobody Told Myles White He was Being Released 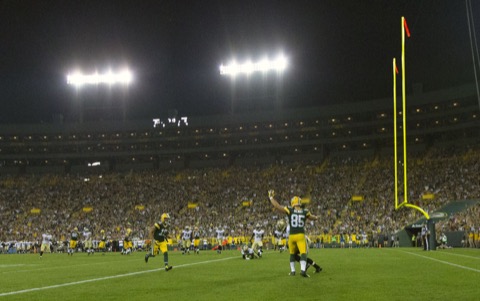 ESPN has a story about how receiver Myles White, who was released by the Green Bay Packers to make room for James Jones, holds no grudge against Jones. It sounds like he does hold a grudge against the Packers though and with pretty good reason.

No one — not coach Mike McCarthy, general manager Ted Thompson or anyone else — bothered to tell him he was being released. Here’s the damning line from that piece by Rob Demovsky.

By Monday, (White) had been released without so much as a conversation with coach Mike McCarthy or a call to his agent from anyone in the organization.

Not only is it shitty that White got released after making the 53-man roster out of training camp for the first time in three tries, but no one could be bothered to tell the guy? That’s straight-up fucked up.

In fact, the only one on the Packers White communicated with was the guy who replaced him on the roster. Jones actually had the decency to have a conversation with the kid.

And if you think this is an isolated incident, it isn’t.

This Packers regime has unceremoniously dispatched a number of players without so much as a “thanks for your contributions, but we’ve decided to go in a different direction” phone call. During the summer of 2014, they were publicly stating how free agents Ryan Pickett and Johnny Jolly could be brought back while privately making other plans. Pickett came out and said he never even got a call from the Packers to say they were moving on.

Kind of a slap in the face, if you ask us, particularly for an organization that goes on and on about high character and “Packer people.”

Guess that stuff doesn’t apply to the people running the team.

They can say all they want about it being a business, but this bit of it was obviously conducted by a bunch of pussies.

Previous Article
Mike McCarthy Backed Off That Comment About the Bears
Next Article
Don’t Worry, James Jones is Getting His Number Back